A familiar face is back in town, although it has undergone quite a facelift. Whistling Willie’s American Grill, which closed for extensive renovations on Feb. 4, reopened for business on Thursday evening, March 14. Things will get back into full musical swing on Friday when local group Painted Betty takes the stage at 8 p.m.

This wasn’t just a cleanup and a fresh coat of paint. The bar area has been expanded and realigned, and the entire space redecorated. A small anteroom behind the bar has been opened up, making the restaurant essentially one large room. The brick wall behind the old bar has been removed, the result being a horseshoe-shaped bar that is twice the size of the original and wraps around into the former anteroom.

The original, dark wooden bar has a rich history, one that may go back as far as 1849 when what was then the Diamond Hotel first opened its doors. While the bar was disassembled, pains were taken to incorporate it into the new look. “We tried to use as much of it as possible and duplicate what we could,” said owner Frank Ciafardini. 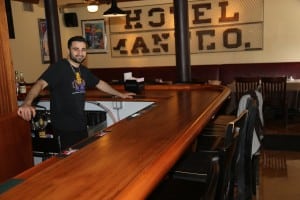 Another element from the past will have a very visible presence in the reconstituted restaurant. A wooden sign for the Hotel Manteo, found in the basement during reconstruction, is now displayed on the wall of the expanded bar. After the Civil War, the Diamond Hotel became the Hotel Manteo.

The menu has also undergone a reconstruction of sorts. Regulars will be happy to know that popular appetizers such as wings, calamari, nachos and tuna tartare will be back, but they will be joined by a number of newcomers such hot soft pretzels, chicken spring rolls, roasted portobello quesadillas and Tuscan bruschetta. A number of new salads are also being added, including butter poached lobster, southwestern chicken, and sashimi tuna.

Burger lovers need not fear — it’s back and at full strength, with 12 different iterations available. The “other sandwich” menu has eight entries, including some interesting possibilities such as a lobster roll, roast chicken panini, grilled cheese and short rib, roast salmon BLT, and veal meatloaf.

Eleven entrees range from rare seared tuna, wild mushroom ravioli and grilled bacon barbecue shrimp to drunken rosemary chicken, root beer baby back ribs and oven-roasted salmon. The kitchen, which also underwent a major upgrade, will operate without a head chef; Ciafardini said, however, that a chef-consultant has been used to develop the new menu.

Beer drinkers will now have 21 varieties of draft brew to choose from — more than twice the previous offering. Ciafardini said that the wine list is still “under development” and is being upgraded. Happy Hour returns from 4 to 6 p.m., Monday through Friday.

The local economy didn’t have to wait until Whistling Willie’s reopened to feel a boost. More than 10 local contractors were hired to complete the renovations. In addition to the refurbished bar, a new, white oak herringbone floor was installed throughout, and the entire ceiling is now adorned with copper-colored pressed tin.

Ciafardini didn’t hesitate when asked what the biggest challenge was during the shutdown. “Time management!” he said. “We’re about a week behind, but we’ve really come a long way.”

Whistling Willie’s has been a mainstay of the Cold Spring music scene for several years, and it seems that is not about to change. “We’ll continue the monthly schedule,” Ciafardini said.

Willie’s will open on Mondays and Tuesdays at 4 p.m., and the kitchen will operate until about 1 a.m. daily. Wednesday through Sunday the restaurant will open at 11 a.m. for lunch. On Friday, Saturday and Sunday, closing time will be 3 a.m.