Former colleagues of ex-Philipstown Supervisor Bill Mazzuca reacted with amazement to news of the fraud charges leveled against him and recalled his years of community involvement.

Mazzuca, Philipstown’s chief executive from 1994 through 2009, faces felony accusations for allegedly improperly claiming nearly $17,000 in unemployment compensation while working as town supervisor for $25,000 a year. At the time, he had been retired for three to four years from his role as superintendent of the Taconic Correctional Facility in Fishkill and was drawing a $115,513 pension. After retiring from that role, he also temporarily held a $90,615 job as a security liaison in the New York Power Authority, another state agency, and worked as a deputy corrections commissioner in Westchester County for $120,000 annually. 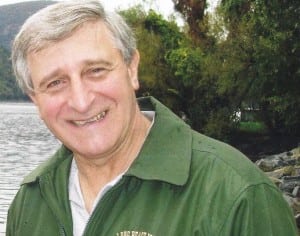 Bill Mazzuca appeared in 2012 campaign materials for Barbara Scuccimarra, including a poster, shown here in excerpt.

According to the formal complaint or list of allegations, Mazzuca is accused on two felony counts — one of insurance fraud and a second of grand larceny, for conduct that occurred between March 23 and Dec. 31, 2009. Filed by Criminal Investigator Henry Lopez of the Putnam County District Attorney’s Office in January, the complaint claims that Mazzuca “knowingly and with intent to defraud, caused to be submitted to the New York State Department of Labor a claim for unemployment benefits certifying that he was not employed, [while] employed by the Town of Philipstown as town supervisor, thus receiving benefits totaling $16,820 that he was not entitled to.” The complaint says the allegations resulted from a law enforcement investigation.

The Cold Spring Justice Court provided a copy of the complaint on Monday, March 18; Mazzuca is scheduled to appear there on Wednesday, April 10. The case remained off the public radar until mid-March, when news media, led by The Journal News of Westchester County, learned of the allegations.

A settlement of some type may be pending.

In a Feb. 12 letter to the Justice Court, Mazzuca’s lawyer, William F. Burke, with the Poughkeepsie firm of O’Neil & Burke LLP, said that in discussions with Chief Assistant District Attorney Christopher York, “I have negotiated a resolution of this matter.”

Attempts to get additional details from Burke were not immediately successful. Mazzuca has not replied to requests for comments.

From 1986-91, Mazzuca, who lives on Parrott Street, was a trustee on the Cold Spring Village Board. He has also been active in Democratic Party affairs, belongs to the Philipstown Recreation Commission, and, in a show of bipartisanship, last fall worked for the election of Barbara Scuccimarra, a Republican, as District 1 representative on the Putnam County Legislature.

His former colleagues expressed shock at the news of his difficulties.

“Based on my experience with him, I have serious doubts about the accusations,” said Anthony D. “Ande” Merante, a Nelsonville village trustee and long-time Democratic Party stalwart, who is also a cousin of Mazzuca. “Having worked with Bill Mazzuca for eight years on the Town Board, and in numerous election campaigns that went along with that, I remember that it was Bill who made sure we stayed on the straight and narrow when others were too willing to shade their actions. Several times,” Merante recalled, “when others tried to pull stunts that gave the name to ‘dirty politics,’ it was Bill who reminded everyone of the legal, proper, and moral way” to proceed.

Merante suggested that the accusations Mazzuca has encountered come with the territory. “Those who come forward to serve their communities always open themselves up to the sort of finger-pointing I’ve read in the press, by those who never step forward,” he said.

“Bill Mazzuca is a friend of mine and I will continue to call him a friend,” said current Philipstown Supervisor Richard Shea, who succeeded Mazzuca. “I think when all the information comes out any felony charges will be dropped.” Shea said Tuesday that “anyone who knows Bill knows that he would not be involved in criminal activity. Here is a man who has a stellar reputation and has been in law enforcement for 30-plus years, a member of the Catholic Church, a coach, a father, an elected official and a mentor to many people, including myself. Does anyone think that he would throw away a lifetime of work and his reputation for any amount of money — let alone $16,000? My understanding is that he filed feeling he was entitled, found out he wasn’t, and returned the money. I find it very hard, if not impossible, to believe that this was anything but a mistake.”

Veteran Town Board Member Betty Budney also expressed surprise. “I don’t feel he did this intentionally, if he at all did it,” Budney said on Monday. “And I really don’t think he’d do a thing like that.”

Legislator Scuccimarra, like Shea and Merante, pointed to Mazzuca’s various local roles over the years. “It’s hard to comment because I don’t know all the facts,” she said Wednesday morning. “It’s tough. There’s a lot of speculation going around.” However, Mazzuca “has given years to public service, years to Philipstown,” she said. Working with him on the Town Board, on which she served from 2008 to early 2012, “was a great experience. We accomplished a lot as a Town Board.”

Dave Merandy, who served on the Haldane School Board before joining the Town Board in January 2012, told Philipstown.info he had not had much contact with Mazzuca and “I’ll reserve comment, but will say that nothing really surprises me.”