At a workshop, the supervisor and four council members (who collectively constitute the Town Board) gave pro forma approval to re-advertising of bids, a step necessitated by the abrupt withdrawal of the previously selected contractor in March. 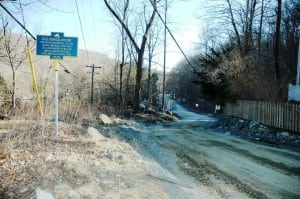 A historical marker, near the site of an old schoolhouse, stands along the section of Old Albany Post Road scheduled for paving.

“We’re ready to go back out to bid. We’re certainly tired of waiting,” Shea said, lashing out at what he regards as “an endless list of new requirements” and red tape snarling the project. He informed his colleagues that a few hours earlier the Federal Emergency Management Agency, better known as FEMA, had informed him that on Thursday (April 25) it would dispatch two archaeologists to the historic road to review drainage plans.

Meanwhile, FEMA also is soliciting new input from a third Native American tribe. (Two groups of Delaware had already weighed in.) In August 2011, FEMA endorsed a Memorandum of Agreement (MOA) in which it joined the town; two New York state agencies, the Historic Preservation and the Emergency Management offices; Old Road Society, a Philipstown dirt-road advocacy group; and the Advisory Council on Historic Preservation in laying out details for the construction work. However, dirt-road aficionados questioned plans for the project five years ago, and while the Old Road Society subsequently signed the MOA, critics remain.

A FEMA press representative told Philipstown.info April 20 that an archaeological visit and FEMA effort to obtain feedback from a third Native American tribe were not unusual and were not prompted by complaints from disgruntled paving opponents. In February, FEMA opened a period of public comment; shortly before the deadline March 6 the initiative had generated only a few responses, according to the administrator overseeing it.

Shea said Wednesday night that an archaeological survey of the 450-foot road section occurred earlier in the run-up to the paving. He also questioned the need for more Native American feedback. The narrow road, winding through the hills, was created by Dutch and British officials in the 17th and early 18th centuries from American Indian trails; a 6.6-mile length of road is on the National Register of Historic Places. 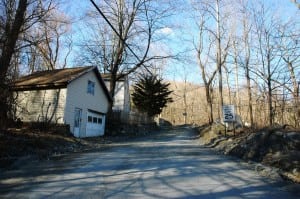 The lower 450 feet of Old Albany Post Road await paving; the tip near Sprout Brook Road already has some paving.

“I have reached a threshold where I feel we have to move. We’ve met all the requirements, gone above and beyond,” Shea said. “We reach the finish line, and the finish line gets moved. We sign an MOA and the MOA is apparently not valid for some reason” in the eyes of some federal employees. “I don’t know who keeps bringing these new conditions up. I just don’t see it as justified,” he told the board. “This is what infuriates taxpayers — there’s been far more money spent on this process than we will ever get back for the entire project. No one can look at this and say this is not absurd.”

With the dissemination of the bid requests, the town hopes to begin paving soon, he concluded. “We’re going to be ready to go, and let the chips sort of fall where they may. If we wait, we’re never going to get it done.”

Other board members concurred.

“Let’s push and get this paved,” Councilor John Van Tassel agreed. “This section has to be done.”

Four days before the board met, a FEMA spokesperson, Caitlin Ostomel, of the agency’s external affairs staff, said the project “is ready to move forward,” as far as FEMA is concerned. “There’s been no impact on the timing” by the decision to send the two archaeologists to review the road, or the appeal to the Indian tribe, steps she said the MOA demands. “There is no stalling. Everything is moving according to schedule.”

The MOA stated that FEMA was to contact the Stockbridge-Munsee Band of Mohican Indians “as part of the historical research effort” and study of the 6.6 National Register section of the Old Albany Post Road (not merely of the 450 feet slated for paving). Also according to the MOA, “upon receipt of the preliminary project plans and specifications” for the project, FEMA would “implement an archaeological field-testing protocol to define how archaeological testing will occur within the area of potential impact of the undertaking [project].”

The MOA said that “in order to focus on the portion with the most potential to cause adverse effects on archaeological resources, archaeological field-testing will be conducted at the location of each proposed drainage catch basin.” Under the MOA, other safeguards would come into play should archaeological artifacts be discovered during the actual road construction.

Contractors can obtain project specifications from the Office of the Town Clerk in Town Hall, 238 Main St., Cold Spring. Sealed bids are due by 11 a.m., Friday, May 17. Town officials scheduled a pre-bid meeting for 11 a.m., Tuesday, May 7, at Town Hall.

One thought on “Despite Red Tape, Town Moves Ahead on Post Road 450-Foot Paving”