A haven for those seeking enlightenment

Two flights of stairs above the door between Archipelago and The Country Goose on Cold Spring’s Main Street is the unlikely location of the Peace Mountain Buddhist Hermitage in Cold Spring. The home of Chris Raines, a Buddhist priest also known as the Rev. Compassion, doubles as a meditation center and library where his students and visitors can practice meditation and study, with the aim of learning to be mindful of the present moment, recognize the impermanence and interconnectedness of all things, reduce suffering and ultimately gain enlightenment. 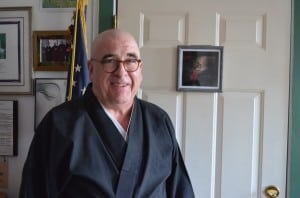 Regular classes on Wednesday evenings consist of periods of walking and seated meditation, along with chanting of the Heart Sutra and discussion. Monday evenings are public “sits” of an hour of seated meditation. The front of the apartment cannot accommodate a very large number of students, so the intimate group of one to five that generally attends the sessions fits comfortably on cushions on the floor.

Beyond these two evenings, students and visitors are welcome at the hermitage to talk with Raines (as long as he is not on silent retreat) or to read and study his large library of books on Buddhism and meditation.

One of Raines’ current students is Cold Spring resident Ann Marie Furey, who has been studying Buddhism with various teachers in the area since the early ’90s. She began going to Raines’ hermitage about six years ago, to the monthly retreat. Furey admires Raines as a role model, someone “purposefully in the moment” and “appreciative of everything and everyone.”

Furey has no ambitions of becoming a priest but simply wishes to live “a good life in peacefulness and joy, not feeling aversion, because we cause our own suffering.” The benefits of studying Buddhism, she said, are “looking at things differently” and learning to “be good to those around [oneself].”

Born and raised in the Bronx and Port Chester, Raines said that from an early age he felt turned off by Western religions, which he often saw as hypocritical. (He did acknowledge that this could be the case with some established sects of Buddhism in Asia, as a religion “gets stale” and there’s a need to “refresh it.”) Nevertheless, he always felt he was seeking a spiritual practice. He encountered Buddhism in Vietnam while fighting in the Vietnam War but said he couldn’t make much sense of it. Returning from the war and feeling lost, he came across the poetry of Vietnamese Buddhist monk and teacher Thich Nhat Hanh, “and then it all started coming together.” 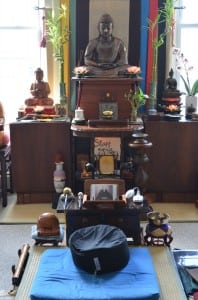 The altar in the Peace Mountain Buddhist Hermitage

Raines began studying meditation and Buddhism in locations in the U.S., including the nearby Chuang Yen Monastery in Carmel, the New Jersey Bodhi Monastery and finally the Middle-Way Meditation Center in Danbury, Conn., where he was ordained eight years ago. Raines is currently the information coordinator of the Buddhist Peace Fellowship and president of the Buddhist Council of New York. In June, he will represent the council on an interfaith visit to Turkey, sponsored by the Turkish Ministry of Culture and Tourism.

‘Good practice for everybody’

There are many different traditions in Buddhism, and Raines practices a Western version of the Vietnamese Chan tradition. (“Chan” is the Chinese name for the tradition known in Japanese as “Zen.”) As in most Buddhist traditions, Raines tries to adhere to the five precepts of morality: not to harm or kill (non-violence), not to steal, no sexual misconduct, no wrong speech, and no use of things (such as drugs and alcohol) that cause heedlessness. The practice aims to achieve the six perfections of generosity, morality (“doing the right thing”), patience, effort, mindfulness and concentration.

Raines summarized what the Buddha said: “If you live a moral life now, you will have a fortunate rebirth, and if you don’t believe in rebirth, you’ll have a fortunate life here and now, so it’s still good — you’ll be surrounded by good friends, and you won’t live a life with any guilt or anything like that.” He is open to people practicing with him who may not believe in everything he does, explaining: “Buddhism does not say you can only be Buddhist. If you want to be Buddhist and Jewish, that’s perfectly fine. Buddha does not care. A practice that’s going to tell you to be mindful, to be aware, is a good practice for everybody.”

The Chan Buddhist notion of rebirth may differ from conventional ideas of reincarnation, because if there is no self, as the Buddha realized in his enlightenment, a person does not actually reincarnate as another person. “In Buddhism, you’re never born, so how can you die?” Raines said. “There’s no death, because there is no birth. That’s all illusion.”

Down the rabbit hole

A major theme in Buddhism is the illusory nature of our perceptions of reality. A person’s experience is made up of five aggregates, Raines said — the physical aggregate (the form or body) and the mental aggregates of feeling, perception, mental formation and consciousness, which all cause an ego-mind to form and believe that it is a self, separate from other beings. “This ego-mind you have is only there because of this form,” he said.

Enlightenment occurs, then, when a person realizes the non-existence of the self and feels a connection to the energy of all beings. “It’s kind of the Avatar stuff … the Force,” Raines said of Buddhism. “They love the first movie of The Matrix, because that’s very Buddhist, because everything is illusion — you’re living in illusion.”

The illusion, however, is what most people cling to as reality. “The best analogy I’ve used is you’re hanging on a cliff, and you’re not about the let go of that cliff and fall,” Raines explained. “What Buddhism is telling you is let go and fall into the unknown. That’s what freedom is.” 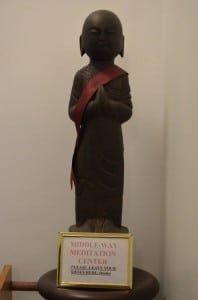 A statue greets visitors to the Peace Mountain Buddhist Hermitage.

One aim in Buddhism is to reduce suffering, which is caused by attachment and aversion. In meditation, one practices letting go — noticing the thoughts that “hook” oneself, especially the “juicy things” one gets stuck on. In meditation, what’s supposed to happen is “you get more and more focused on your breath, and that becomes everything. You don’t stop thinking; it’s all still there — everything is there — but you don’t cling onto it, just let it go. It takes a lot of work.”

Raines said it is often difficult for beginners to understand the amount of work needed to learn to meditate. “Most people come and they want to be enlightened first time or second time they’re here, and I tell them, ‘It’s probably going to take you a couple years just to get into the form, the physical form of it, without everything falling asleep right away, being able to sit for an hour, and then we’ll work on the rest of the stuff.’”

For those wanting to get into a meditation practice, Raines advised: “Put that time aside for you — this is your time.” He also pointed out the benefits of having a teacher: “A teacher has been there, done it. The only job of a teacher is to be a guide. There’s no great insight involved here, you know, but the teacher does give some instruction, especially in interviews.”

All are welcome to Raines’ public hour-long sits on Monday evenings 7 to 8 p.m. and at Wednesday classes 7 to 8:30 p.m. Morning meditation is also open to the public on Tuesday, Wednesday and Thursday from 7 to 8 a.m. — “Come when you can and leave when needed.” Every third Sunday of the month is a retreat morning from 9 a.m. to noon. Beginners should arrive early for meditation instructions, which are also given upon request. The hermitage is located at 117 Main St., Apt. 3E, in Cold Spring. For more information and a detailed schedule, email [email protected]