After the service and dinner this year, members of the Jewish congregation spoke about their experiences at PRS, reflecting on a decade of community that has focused on sharing and learning about Jewish worship and traditions.

With the recent departure of their rabbi of two years, Mike Rothbaum, for a job on the West Coast, PRS continues to look back at what has been a story of hard-earned success while contemplating the challenges that face the synagogue today.

Inclusion from the start

The PRS website states the congregation’s mission succinctly: “The synagogue was created in 2002 with the purpose of creating an inclusive venue to investigate the practice of Judaism, both intellectually and spiritually.” The story of how it began reveals why inclusivity and investigation are such high priorities at PRS.

Joe Barbaro and Roberta Shayo, an interfaith couple in Cold Spring, were cheered at the March celebration as instrumental in the congregation’s founding, though Shayo later demurred, “We opened the book, and they (the congregation) filled in the pages.” In a recent interview, Shayo credited her husband, who is active in both the Methodist and Episcopal churches in Cold Spring, with the idea of creating a synagogue in Philipstown.

Current PRS President Diane Botnick explained Barbaro’s motivation: “There’s a lot of onus put on organized religion, but when you think of it as a community and not as a bureaucracy, it becomes something else entirely. He had that community; he mourned the fact that she did not.”

“Joe had been witness to my own frustration and saying that I wished there was a place for the two of us to go comfortably, because we are an interfaith couple,” Shayo said, “where we could have an opportunity to learn about each other’s faiths in a safe, supportive environment.”

Both then conducted a lot of research, Barbaro into Judaism so he could bring the idea to local churches to find potential meeting venues, and Shayo into how to start a congregation by meeting with rabbis at the Union of Reform Judaism in New York City. They ran an ad in the newspaper advertising an organizational meeting at the Butterfield Library in Cold Spring to see if there was interest in forming a Jewish congregation. The attendees were surprised to find out who in the area was Jewish. Barbaro said people were exclaiming, “I didn’t know you were Jewish!”

After a series of meetings at the library, which Shayo praised for their generosity in hosting them, the group decided to hold their first event, Shabbat Across America. A founding member, Botnick said: “We just thought it was a way to get together. I think we practically had 200 people at this dinner!”

Growth: not only in numbers

The enthusiasm from that first year has died down over time — the 10th Shabbat Across America was not nearly as heavily attended, and they have had to return to once-monthly services after offering them twice monthly — but Botnick sees advantages to being a small group. “Now we have a very tight-knit group of people that, we’re kind of winging it every time we get together, but we learn a lot by doing that, and so we keep at it,” she said. 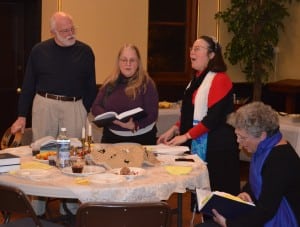 In a phenomenon that resembles the “Chreasters” in Christian churches — those who only attend church at Christmas and Easter — most synagogues find themselves overrun at the High Holy Days of Rosh Hashana and Yom Kippur. For PRS, Botnick said, they usually find an attendance of 50 to 60 or more during the “Days of Awe.”

“At first we worried about, ‘How are we going to turn them into members? How are we going to get them to come back?’” she said. “And I thought, ‘You know what? It’s important to have a place where people can come for the High Holidays, and if they don’t want anything more than that, that’s fine with me.”

The expense of holding large services during the High Holy Days, though, can tax any synagogue. Many therefore only allow dues-paying members to participate in those services or charge for them. This, however, would not be inclusive, and PRS has always kept services free and open to the public. “We call it a mitzvah, which is doing good for others,” said Botnick.

Along with this mitzvah (or commandment), PRS holds a collection for the Philipstown Food Pantry at all services and participates in local donation drives. Members are also individually philanthropic, Botnick explained, and Judaism does outline several different levels of obligations for giving, from partial gifts to those who request them, all the way to anonymous gifts to unknown recipients. “It’s something that we all strive toward, to be content in just giving,” Botnick said, adding, “I bet all religions actually feel that same way, even if it isn’t written.”

A Hebrew school had previously been run successfully by volunteers, including members Stephanie Rudolph, Sharona Berken and Paul Kaye, to educate members’ children and prepare them for their Bar or Bat Mitvahs (Jewish coming-of-age ceremonies). Rudolph noted: “Many of these ‘founding’ families were not comfortable with the rigidity of the surrounding classical Hebrew schools and wanted something that spoke to their lifestyle and comfort zone. The formation of PRS was the perfect vehicle for these families to come together and start a class.” With the great amount of work required to run such a school and a decrease in the number of children in the congregation, it isn’t feasible for PRS to offer such a school now. 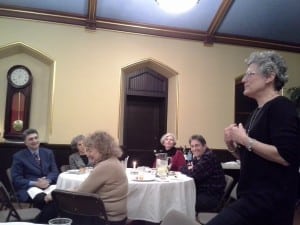 This and the loss of their rabbi recently led PRS to reach out to other Jewish organizations, including Surprise Lake Camp in North Highlands and the Beacon Hebrew Alliance (BHA), to connect and share resources. From both organizations, Botnick has come to refine the mission of PRS, finding that inclusion can mean sharing traditions (just as Surprise Lake keeps kosher in order to include everyone) and raising consciousness of Jewish culture and spirituality in the Hudson Valley (which BHA Rabbi Brent Spodek named as one of his main goals).

PRS is still committed to serving Philipstown, reassured Botnick, especially as a venue for everyone to learn Jewish worship in a supportive environment, with new prayer books that include the Hebrew script as well as a transliteration, an English translation and English poems (whereas Conservative congregations like BHA’s usually conduct services mainly in Hebrew).

The community aspect is also important to Botnick. “They’re people that I have grown to love and who I never would have known without this synagogue. We get together — it’s all these nutty people — we all have a good time and we learn a little bit and we pray a little bit.”

Not having their own building has its pros and cons, according to Botnick. “There have been people who really wanted [a building] and felt, perhaps correctly, that without a building we weren’t likely to grow. On the other hand, we’re so small, and there’s a feeling that, money aside, a building has to be used — there has to be life in a building, and we can’t bring life into that building seven days a week.”

In its formative years, PRS held services at St. Philip’s Episcopal Church, the Desmond-Fish Library and the Garrison Institute, and once the congregation had raised enough money to purchase their own Torah — the Hebrew Bible (known to Christians as the Old Testament) — they stored it in a confessional stall at the convent at Graymoor. PRS now uses the Parish Hall at St. Mary’s, which houses the ark containing the Torah in a special place in the church.

“What I find in the community is that people in the religious, spiritual world are very respectful and only want to foster more spirituality,” said Botnick.

Shayo acknowledged the difficulties of collaborating with other religions. “Sure, there’s questions and disagreements,” she said, but the opportunity to learn about other religions is necessary to offer “a common ground of understanding so that you can hopefully dispel prejudices or misconceptions with education and sharing, so that you can have a dialogue based on knowledge, not on speculation or just ancient prejudices.”