Lisa and Joe Diebboll came early to their calling. As students at Rhode Island School of Design (RISD), both initially studying painting, they turned to printmaking after feeling disappointed with the painting department there. It wasn’t a new form to Joe, who had studied printmaking in high school and whose art teacher had, in fact, predicted he would become a printmaker. Printmakers they have both become, running Cold Spring’s Highland Studio HS, located in a spacious two-story studio building they custom-built on their property down a dirt road right off of Route 9. 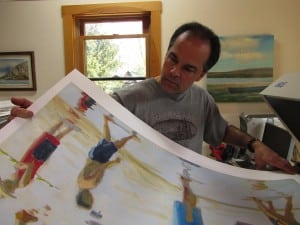 Joe Diebboll takes an Iris print by Rob Diebboll off of the printer.  Photo by Lisa Diebboll

The Highland Studio, which began life in Nelsonville and then journeyed to Beacon before moving to its present location, is, as its website describes it, “a fine art atelier dedicated to capturing every detail of the artist’s intent. These are not posters made in a high volume printing factory setting, but fine quality art prints worthy of special care and handling. These prints will last for generations because every care is taken with regard to ink, paper, process and handling.”

The prints can be meticulous reproductions of already existing paintings or other artworks, or originals, new works made in collaboration with artists, sometimes created from a combination of images and even from combinations of paintings and other objects or images.

Along with prints, HS also offers custom framing, sales of reproductions of antique prints, maps and other artworks, remastered 19th century stereoviews illustrating life and scenery along the Hudson, and contemporary photographs by Joe, largely of the natural world, printed on albumen paper, which, when magnified, gives them texture. They have many regulars, often city transplants, “People move up here and just get drawn into the history,” says Joe.

At RISD, Lisa found the printmaking process “exciting” while Joe notes that it gave them a skill, which made it easier to get a job, post-college. After graduation they moved to Brooklyn and worked in  silk screening for about 13 years, reproducing paintings and matching those paintings closely. “We would interpret certain marks made by artists, and reproduce them, all by hand,” says Lisa, skills they honed which they use today, digitally, having become early digital innovators.

Leaving Brooklyn, (they were raised near Philadelphia, Lisa, and Detroit, Joe), the pair first moved to Ossining, and worked in another silk screen studio in Westchester. They relocated to Cold Spring in 1990 after visiting the area and loving it. Their two daughters were born and raised here; the younger of the two departing for college imminently. 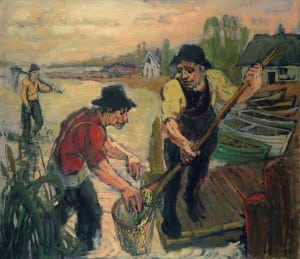 With “no connections — we started from scratch with cold calling and advertising in trade magazines — it started to become a digital world though and I got a digital presence, which really got things going … I watched digital things as they started to occur and thought they were amazing,” recalls Lisa, “in 1997 there were maybe 10 or 15 digital studios across the country doing what we were doing. It is really based in a fine art method, using archival materials of the best quality … We take a lot of time with the work.” Joe adds, “We’ll sit down and collaborate with the artists and create images while they’re still here.”

Their business took off with collaborations with artists like photographer Leonard Freed (whose work was recently profiled in The Paper/Philipstown.info) and the Putnam County Historical Society.  They moved to a storefront in the West End of Beacon for six years, lured by the then-inexpensive rent and the ability to connect with lots of artists, before deciding to build their own studio, tailored to their specific needs, on land near their residence. Now the Diebbolls are so well established that clients come to them from all over, many from New York City, “artists and digital artists have us do their printing,” says Joe, but others from Pennsylvania, Arkansas even, “and all over the country, really.”

Not all of their clientele includes fine artists, though. Their doors are open to the public, and they work on anything and everything.

“We have people coming in with photos of their mother,” says Lisa, “from soup to nuts. We’ve done the smallest projects to some very large ones — one of the biggest was for the New York Presbyterian Hospital Milstein Family Heart Center for whom we made a beautiful, huge — 85-foot by 10-foot — mural print of a work by John Beerman. We started by scanning the original in separate panels, then he came here and partially painted some of it so it was a mix of painting and printing.”

Initially, the Diebbolls used an Iris drum printer, which they still have, although these are no longer being manufactured. Prints made this way had an optimal life of about 15 years, while the technology incorporated in their newer Epson 11880 lasts for about 100 and gives them the capability of printing up to a 64-inch width on archival canvas or paper. Questions, like this one posed on their site, determine many of the processes used: “Do you want your black and white photography to be printed on a true watercolor paper, like Arches Cold Press? Then you have to choose the Iris printer in order to get really rich blacks.”

Images are initially scanned on one of two scanners, one called The Betterlight direct 4×5 scanback system, used to scan paintings and anything else oversized or gloss and provides “incredible detail and sharpness.” This scanner uses an old-fashioned 4×5 camera, after the artwork is lit very precisely, the scanner is inserted right where the film would normally be put.

The scanning takes about 10 or 15 minutes, and then they get to work with their color process, utilizing software and their specific knowledge of colors for expert color matching or color changing. The scanning quality allows for “tiny originals to be printed super large and, retaining visual integrity,” according to a description on the studio’s site. Many proofs later, the work is complete. The other scanner is an Imacon Flextight drum scanner which scans transparencies.

For straight reproductions, “We can scan really large paintings at a very high quality,” Lisa says, “It’s a great way to reproduce every single brush stroke available digitally. They can be printed on canvas and we can even add brushstrokes to an enlarged print to make it seem more realistic.” 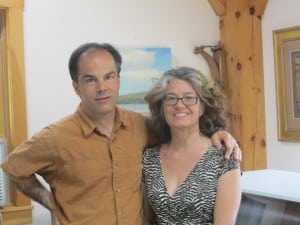 Joe and Lisa Diebboll   Photo by A. Rooney

For two people who have been working together in the same field for decades, the work never grows stale for them. “We keep learning — from photographers and painters,” says Joe. “It’s always new,” adds Lisa, “working with different artists who are always different in what they want and how they want to get there keeps it fresh. People come in and we talk about their art — it’s exciting.”

The Highland Studio is located at 31 Stephanie Lane in Cold Spring. Although one can stop by, it is best to call beforehand, 845-809-5174, or email [email protected]. Visit thehighlandstudio.com for more information.