Contemporary sculpture installations on view at Saunders Farm through Oct. 26

The Farm Project at Saunders Farm is currently on view through Oct. 26, with sculpture and site-specific art works by 52 artists. The exhibition covers 100 sprawling hilly acres of fields and bordering woodland that make up this working historic farm in Garrison. A roaming herd of Black Angus cattle, several horses and one goat in permanent residence accompany (and have been known to interact with) the exhibition. Farmer Sandy Saunders generously loaned this location to Collaborative Concepts as he has done now for eight consecutive years. 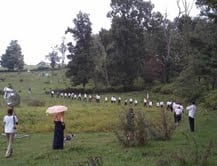 A curated performance art work titled “decomposer” opened this year’s exhibition. Forty participants, including professional musicians, non-musicians and a documentation team, set themselves apart from the lush green surroundings attired in white shirts, black pants and a variety of instruments. Invited by organizers Thomas Huber, Matt Frieburghaus and Laura Kaufman, with a set of rules written by Huber (inspired by composer John Cage), the piece began with all facing towards one another in a circle. In the center was a bass drummer who led the procession with a slow steady beat.

The players were then asked to play a sustained F note and turn away from each other walking off into the fields at their own speed. They played in response to one another, improvising, while continually moving around the fields. The performance lasted 45 minutes and the players’ movements created a striking visual composition as well as a surprisingly harmonic sound experience for listeners.

There are several noteworthy newcomers to Saunders this season: John Belardo’s glistening aluminum Liberty’s Face is one of the first sculptures to greet visitors as they enter the farm. It is a contemporary version of the classical portrait from the Statue of Liberty, though missing a body below. Also referencing Buckminster Fuller’s geodesic dome, the stern face is made of metal planes and lines converging at points around a radius and supported by a wooden triangle high above the ground.

According to the artist, “Leonardo da Vinci’s Vitruvian Man has a direct correlation to my work. Da Vinci was the most famous of many artists to interpret the words of Vitruvius Pollio who said, in reference to classical human proportions, that the figure could be inscribed in a circle and a square.”

Another figurative work is Working Woman by Ada Pilar-Cruz. A sensitive clay female figure, modest in scale, is nestled among ceramic shards and stones, with hands coming together around a piece of pottery. This diminutive and reverent woman at work is set against a massive towering stone, suggesting that women throughout history have been the pillars of culture and civilization.

Four large concrete heads titled Asian Portraits by Barney Hodes emerge from the landscape in a straight line, each supported by a thin metal base a few feet above the ground. Solemn and grey these faces of undetermined gender seem downcast and dispirited, but their highly worked surfaces depict tenderness and care for their sources.

Interesting Times is a series of vinyl banners that present images of cultural sites in countries where there have been recent upheavals along with images of protests. The individual banners are strung together on a cable and suspended like prayer flags and include Tunisia, Egypt, Libya, Mali, Syria, Greece, Portugal, Ireland, Turkey and Brazil. According to artist Janet Goldner, “My intention is to show their rich cultural heritage that is important to all of us and the depth of the global crisis.” 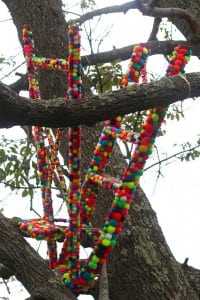 One of the few festive and colorful works in this year’s exhibition is POM! POM! Extravaganza by Maureen McCourt. Perched high up into a tree as if flung there by a tornado is a ladder covered in fluffy pom-poms. A material used by kids in arts and crafts projects contrasting with this basic utilitarian object provides both a bit of humor and visual delight as well as wonder at how it landed there.

Also installed high up in a tree is Double Arbor Helix by Winn Rea. Found in a wooded section of the farm it was a surprise to come upon, subtle enough to be overlooked. Composed of 20 or more tree branches and made to look as if they had been shot straight through the tree, the piece resembles a cartoon signpost – except that the branches point in all directions at once.

In fact they spiral around the tree in an intentional pattern inspired by a DNA helix – and according to the artist, “explore the fact that each tree has unique DNA that is surprisingly similar to human DNA.”

Dienos Sauros by Peter Schlemowitz is an exploration of what the artist calls an “endless sculpture” in that it’s created from connected modular pieces. Made of wood and painted a bright purple, it contrasts positive against negative shapes and resembles a hulking creature lumbering across the green landscape. 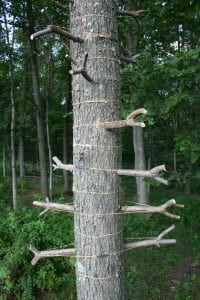 Perched in a tree and resting perfectly in the space between two large limbs is Resonance by Eva Whorley. Seven feet in diameter, it is made from a reclaimed object – an old satellite dish. Added steel wire creates a web form with an itinerant spider.

According to the artist, “It is a play on how nature hears and how man hears through resonance and vibration. Nature is calling out to mankind to cease and desist the destruction to the environment. Perhaps with the use of the satellite dish the message will get through.”

An assortment of spheres covered with ceramic and glass shard patterns are nestled among a rock outcropping in Brook Maher’s, Bowling with Hendrick Hudson’s Half-Moon Crew. Her inspiration can be found in this quote: “…It was a fact, handed down from his ancestor the historian, that the Catskill Mountains had always been haunted by strange beings.

That it was affirmed that the great Hendrick Hudson, the first discoverer of the river and country, kept a kind of vigil there every 20 years, with his crew of the Half-Moon, being permitted in this way to revisit the scenes of his enterprise, and keep a guardian eye upon the river, and the great city called by his name. That his father had once seen them in their old Dutch dresses playing at ninepins in a hollow of the mountain; and that he himself had heard, one summer afternoon, the sound of their balls, like long peals of thunder” (from Rip Van Winkle, A Posthumous Writing of Diedrich Knickerbocker by Washington Irving). 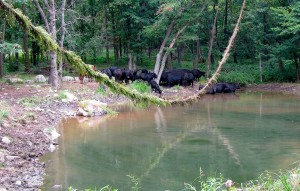 “Skybow” was created by artist Roy Staab over the cow pond. Photo by Roy Staab

Skybow was created by artist Roy Staab over the cow pond during a period of 10 days. Making use of accessible organic materials found on site such as mugwort, goldenrod and reeds, he tied them together in a long line to create a 300-foot-long arc, which crosses the horizontal length of the pond. This perfect line drawing in space is determined by tall trees at either end. Suspended between the trees, the line moves gracefully as wind blows in the treetops.

This is the artist’s desired effect when nature contributes to the beauty of his ephemeral art, but the continual changes of weather and the toll of time will eventually cause its demise.