Foot In Mouth Players get scary 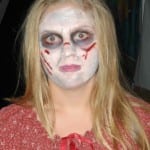 Jordan Erickson, portraying a possessed girl from the ’Museum of Horrors’  about 5 years ago.

For the 10th season, the folks who love to scare others are back in residence at the Philipstown Community Center, otherwise known by this shorthand: Haunted House, Rec.

They’re a band of industrious teenagers, and their intrepid leader, Rec’s Frank Caccetta, schemes up ever-scarier scenarios and turns them into dark life, using visual techniques, sound effects and improvs, which stem from scripts they come up with themselves. The goal is always to “put them [the attendees] in the middle of a story, rather than just do ‘jump out at you’ kind of things – though we do those, too,” says Caccetta.

The players have conjured up various ominous scenarios in the past, with themes including a ghost orphanage (cracked walls, pictures of orphan girls who disappeared…), psychiatric ward (gurneys, curtains,) and — but of course — vampires. In other years women have been sawed in half, things have been levitated, flown across the room and there’s been a shaking table or two. In an interview just before the opening this year, Caccetta remained intentionally mysterious about this year’s theme, revealing little of the evil-doings in advance. 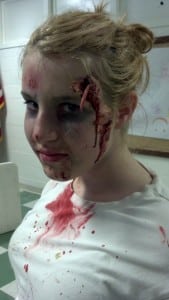 Becky Gore,  a member of  the zombie horde in the military
quarantine zone at this year’s Haunted House.

It all began a decade ago, when Caccetta, looking around at the large space at Rec, got the notion of doing a haunted house there. The first year, with the help of a few kids and a $400 budget, it was up and running within a month of developing the idea, solely within the confines of the building.

The budget has grown to several thousand dollars, the helpers, both kids and adults, number anywhere from 18 to 30, and the “Haunted House” now incorporates two whole floors plus outside grounds, where participants follow a path to their nightmares. A steady stream of haunted house-goers begins each night when doors open, and they go non-stop for three hours, sometimes longer. Each group of eight to 10 people goes through before the next group enters (at their own risk…).

Actually, there are two separate “houses” – the “Fun House,” designed for young children (the suggested age is ‘under 6’) which takes place on most of the same days as the “Haunted House” but earlier, when it is still light out. The Fun House features story-telling and game playing.

Though they might spot a ghost or two, it is all designed to go light on the chills. Then, with just a half hour in between, the space, lighting and “haunted actors” are transformed, with make-up, costumes and attitude, into far more fearsome creatures, awaiting the older kids and adults who come streaming in as the doors open. The suggested minimum age for Haunted House is, according to Caccetta, “when you think your kids can handle it.” Kids can come in with or without their parents, and anyone is free to leave at any time if they get too frightened (one entire group did so after only one room one year, then returned the following year and stayed the course eagerly).

The teens are all part of Foot In Mouth Players, (FIMP) an acting troupe Caccetta started after the first year of Haunted House. FIMP, which meets most Tuesday nights from 6:30 to 8:30 p.m., is a free Rec program, and kids present several productions throughout the year, including a Broadway revue, a musical and a production in the summer tied into Rec camp’s needs. With this and the other productions Caccetta tries to “educate the kids in all aspects of theater, from set building to script work. As a group we bang out ideas,” he says. “We’ll come up with the script but it’s just a guideline — you have to be ready to improv at any moment.” 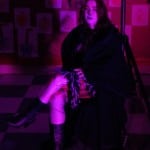 Jessica Gore as a feline storyteller from the Fun House two years ago.
Photo by Frank Caccetta

Caccetta is full of praise for his helpers: “These kids work hard; I can’t be more proud of them.” The entire thing is put together the night before opening, then taken down completely overnight during the first Sunday of its two-weekend run, in order to make the space suitable for the Monday morning-arriving preschoolers who take back their space for a week before FIMP does it all again for a second weekend.

The Haunted House is a particular FIMP favorite though. It’s obvious why: “We get scary,” says Caccetta. “We try to mix things in that will make things uncomfortable, something that hits a nerve somewhere.  Our ‘Boo Crew’ goes through training on things like when and how to jump out — there’s a science to it.” Asked for a tip on this, Caccetta merely said, “If you’re scared of a place, are you going to be the first one in? No. The last one in? No. Target the middle of the group.”