One of the three, Supervisor Richard Shea, specifically mentioned the PCNR by name. The others, Councilors Dave Merandy and Nancy Montgomery, referred to it as “the paper” but made clear they meant the PCNR.

At the formal monthly Town Board meeting, Merandy spoke out as liaison to the Philipstown Planning Board, the panel involved in the land division that turned a 60-acre holding near the town Recreation Center in Garrison into three separate 20-acre plots. Earlier in the day, the Nov. 6 copy of the PCNR had arrived in local mailboxes; it contained a rambling inflammatory commentary by PCNR Editor Douglas Cunningham attacking the Planning Board as well as local governments’ actions overall in regard to environmental groups,  the Butterfield Hospital redevelopment, and similar matters. 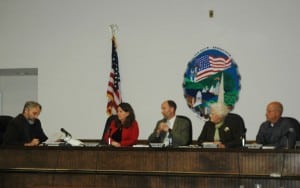 In part, Cunningham wrote that “it is taking years to get Butterfield and a new senior center done in Cold Spring, but a new subdivision for OSI in the town speeds through the approvals like greased lightning” and that while “we know it involves two municipalities, Philipstown and Cold Spring, we think it’s still wrong that seniors get shunted aside. Everyone in power seems happy to jump so fast and so high if it’s OSI or Scenic Hudson calling,”

Cunningham went on, “but for the seniors, not so much.” (In fact, the Cold Spring village government spent several years evaluating Scenic Hudson’s West Point Foundry Preserve renovation project.) Cunningham’s column followed one, a few weeks earlier, in a similar vein.

Merandy cited “some of the rumors flying about” and read through an extensive chronology of Planning Board steps regarding the OSI land division “so everyone will know this was not streamlined. The evidence is clear and available for anyone choosing to know the facts.”

Furthermore, he said, “the application is only a paper subdivision, meaning no physical work was to take place connected to this particular application. I think that’s very important to note.”And “it’s not like they went down there and we rubber-stamped something. I think to suggest that this was anything but an above-board application and that everything was done as it’s supposed to be is really a disservice to this community. This application was done as it should have been done.”

As for the PCNR, Merandy said: “There should have been more actual investigating to find out the facts before stuff was put in the paper. I’d hope in the future that would happen and these rumors wouldn’t be spread.”

He and Shea both found fault with the PCNR’s linkage of the Butterfield Project, under the jurisdiction of the Village of Cold Spring, to the OSI subdivision. “Trying to compare and mix this all up is really a disservice to this community,” Merandy said. “This community is a great community; I don’t care what some people say. There are some people who don’t want to see harmony in this town. And it has nothing with boards trying to move things forward or playing favorite to anybody.”

Shea likewise pointed to the detailed Philipstown Planning Board review of the OSI subdivision. “This can hardly be a referred to as a ‘greased lightning’ process as was referred to in the Putnam County News,” the supervisor said. “That’s an unfair assessment. Every single applicant that comes before the Planning Board is put through the same process. It’s a level playing field for everyone.” As a non-profit institution like OSI in a rural area, “you don’t get any special treatment or bonuses. You are subject to the most stringent zoning requirement, which is a 20-acre lot,” Shea added.

He alluded to the PCNR’s editorial stance on the town rezoning, a running controversy from mid-2009 to mid-2011. “It seems that the people who are now commenting on this, who two short years ago were champions of property rights, suddenly have had a change of heart,” Shea said. “I guess it depends on who is applying for a subdivision whether [they’re] going to champion property rights or not.”

The supervisor provided a brief civics lesson in the distinctions between the Village of Cold Spring and Town of Philipstown government jurisdictions and forms of review. “I’d like to help the PCNR along and educate them,” Shea said. “When you start comparing something like a three-lot subdivision, which is a pretty standard operational process, to something like Butterfield – that’s a far stretch. They’re not similar at all.”

“Butterfield is a lot of building on a relatively small piece of land. That has to be vetted properly,” Merandy commented.

Besides, Shea pointed out, “we don’t have purview in the village. We deal with things outside the village.”

Shea and Merandy took issue with that and defended the Planning Board.

“There’s been kind of disparaging things said” about “people that volunteer a lot of their time” on such town committees, Merandy said. “I don’t think they should be railroaded or driven through the mud like they have been.”

Planning Board members “do a terrific job,” Shea said. “It’s hard enough to get volunteers, but when you see your name being dragged through the paper, it makes our job a little more difficult, to get qualified people to step up. They don’t want to see that.”

Montgomery spoke of insinuations of town negligence for purportedly letting the Recreation Center playing fields or the historic Desmond Fish mansion, on one of the subdivided parcels, be imperiled. “We wanted that property. We couldn’t afford it,” she said. Restoring the mansion “would have cost $20 million. We had a great interest in it. We would’ve done anything” to acquire it, she explained. “But we have to maintain what we have right now; we’re struggling to do that.”

She criticized the PCNR’s coverage of town involvement with senior citizens and efforts to get a senior citizens center. “I’ve talked to the publisher of the paper about the senior center several times,” she noted. The PCNR publisher, Beth Ailes, and her husband, Fox News chairman Roger Ailes, have offered to provide family funding for a senior center.

Moreover, Montgomery said that as a Town Board member she has attended numerous Putnam County meetings and hearings on senior issues, talked to county officials, and met with seniors themselves, while the town government has initiated new programs for seniors and plans more. “Many of you may not know” of these endeavors “because this isn’t ever reported. It’s reported that we’re not doing anything for the seniors,” she said.

She also noted that Beth Ailes had scheduled a meeting with seniors for Saturday, Nov. 9, but that she had not been asked to attend. “I’m upset I wasn’t invited to that meeting. I know other public officials were [invited].” Senior citizen services “is something I’ve been working very hard on,” she added. “I want us to all work together.”