In a ceremony held on Saturday, Jan. 11, the nine Senior Webelos of Cub Scout Pack 137, Philipstown, received the Arrow of Light Award. The Arrow of Light is the highest award received in Cub Scouts and an award that moves up with the recipient to Boy Scouts. 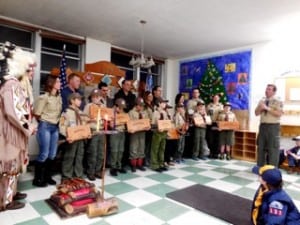 The ceremony was held at the Philipstown Recreation Department and officiated by Bob Rice, known as Akela, a longtime Cub Scout volunteer. Dressed in Native American Indian interpretive garments and wearing a full headdress, Akela performed a brief fire-eating demonstration before he described the Scouts’ journey through their Tiger, Wolf, Bear and, finally, Webelos years of Cub Scouting. He gave each scout the Boy Scout handshake as Cubmaster Gary Gunther handed the boys their awards.

Rice pointed out that the national average for receiving this honor is 71 percent, but Pack 137 has 100 percent of the Scouts achieving the award. At the close of the ceremony, Akela led his signature “Froggy” sing-along with the members of the pack and their families.

The recipients of the award are Robbie Bohl, Everett Campanile, Dylan Gunther, Ben McEwen, Graeme McGrath, Patrick Reinhardt, Andy Scicluna, Andrew Silhavy, and Calvin Shuk. Together, along with their leader, Maureen McGrath, and assistant leaders, Melany Campanile and Sandy Bohl, they have been known as the Blue Phoenix Den. From this point, until they cross over to Boy Scouts in March, they will be called the Arrow of Light Den.

To be eligible for the award, a Scout must be active in a Webelos Den for at least six months and have earned the Webelos badge. He must be knowledgeable of the requirements to become a Boy Scout including the oath, law, slogan, and motto as well as understanding the significance of the First Class Scout badge and uniform. The Scout must participate in an outdoor activity with a Boy Scout troop, attend a meeting with the troop, and go on a Webelos campout. He is also required to earn a total of eight activity badges.

The nine recipients of the award received the badge and a hand-carved plaque. The plaque holds a traditional arrow made by a Navajo Indian and had been decorated by the Scouts’ parents with threads symbolizing each of the awards the Scout has earned throughout his Cub Scout years.