There’s a forest of sorts in Jessica Wickham’s Beacon studio: a grove made up of slabs from the hundreds of trees she has been retrieving from the nearby Hudson Valley over the past 10 years, turning them into designs in which the natural forms hold sway, joined by modern design aesthetics and ancient, traditional joinery methods, many of which Wickham studied over a five-year period in Japan, where she truly developed what had been a nascent interest in working with wood. 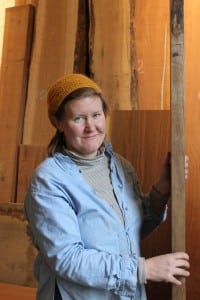 These designs — tables, beds, stools and other furniture — most often made on a commissioned basis, frequently in collaboration with interior designers and architects, are found in private residences throughout the country. Locally, cutting boards, fashioned from small pieces and remnants of Wickham’s larger works, are sold at a number of Beacon stores.

Wickham and her team, known collectively as Wickham Solid Wood Studio (WSWS), do not step into the process after initial work has been done by an outside company. Instead they begin at the beginning, salvaging downed trees, hearing about them from local landowners, arborists and sometimes land trusts.

They work largely with hardwoods commonly found in the northeast: black walnut, white oak, black cherry, white ash, red elm, among others, most of them more than 75 years old and with 20-plus-inch diameters. WSWS examines the tree where it fell, determining its probable suitability, milling and transporting those deemed worthy to a sawmill and drying barn in Orange County.

Wickham’s website describes the process: “A perishable material, wood logs must be processed carefully and quickly before milling to avoid deterioration. End grain must be sealed, bark removed carefully by hand, and the log stored off the ground and away from the sun … Opening a log is always a revelation, revealing burls, knots, colors and textures that have been deposited over the life of the tree. No two are ever alike.” The logs are handled precisely, with a focus on preserving the natural edge of the tree. Each board is “de-barked” by hand before stacking it up to dry. Typical processing time from log to finished piece of furniture is two years.

Wickham and her team keep very careful track of each piece of wood and its origin. Right from the sawmill every piece is tagged with an identifying code, which labels not only the source, but the cut date and the position within the log. Once within her studio, two years later, the slabs are stacked in a manner representative of how they originally were oriented in the tree — this maintains the patterns in the grain. 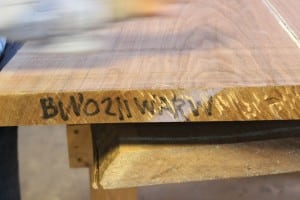 Each piece of wood is coded with type (in this instance black walnut), date and origin.

“Knowing the sequence of boards in each flitch enables us to match color and grain when it comes time to make a piece of furniture,” Wickham’s site states. Equally important is respecting and using the actual edge of the tree.  “… The true sinews, curves and growths rings in the edge can be exquisitely elegant. A gorgeous natural edge table reflects the way the material has been handled.”

Just watching Wickham in her large studio space, noting her eyes and hands almost unconsciously traveling in close examination of whatever piece of wood is nearest to her and catches her eye momentarily, it is easy to understand her comment: “We love to ‘read the tree’ and select interesting details to emphasize in our designs.”

It is interesting to consider that Wickham herself is not a “native species” growing up in rusticity, but rather New York City-bred (with frequent forays to the home of her grandparents up the Hudson however). She studied cultural anthropology at the University of Michigan and then embarked on a financial services career, which wound up taking her to Japan, on an overseas assignment, and it was there that all things changed in her life. Recalls Wickham:

My job was a very intense environment. I was successful, but it didn’t have depth. I totally fell in love with Japan and was amazed by the level of craftsmanship found in everyday life. Japanese culture is very visual — a lot of that has to do with their system of writing — and there’s a graphic sensibility. I was getting vacuumed up by work and I wanted something different, to take me away from work. Years before, I had gone to an exhibit on Japanese joinery and found it stunningly simple, completely fascinating and meaningful. The vocabulary of joinery in Japan stems from climate: the heat, cold, earthquakes; the joinery needs to be specific. I decided I wanted to learn about it. It was the early days of the Internet (1999) and I started searching on the web.

Wickham found someone who connected her with someone else, in Tokyo.

It was a very pivotal moment in many ways. This whole business resulted from many providential moments when things just kind of happened.” Wickham got invited to a study group focusing on sashimono, or “the joining of things,” an ancient craft mostly dedicated to making boxes — not carpentry. There, she spent a solid year learning about Japanese edge tools, including how to sharpen them on water stones taken from specific mountains, techniques dating back to technology used in swords, sushi knives and all “loaded with symbolism,” according to Wickham. Each study session began and ended with a philosophical talk by the instructor. What Wickham learned there (and she still has the tool box it took her a year to make) translates now into her work. “It’s about paying attention to the wood. Each tree has its own character and you have to pay attention and think about things like which direction to use tools in to accomplish what you want. It’s a different kind of knowledge.

Wickham eventually quit her job and stayed on an additional year and a half (for a total of five) in Japan, moving to a little town outside of Tokyo. Down the street from her there was a building, 1,600 years old, made of wood, still in good condition. “That astonishing character of wood was inspiring,” she says. 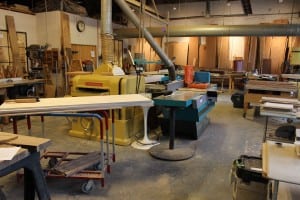 A view of the main room in Jessica Wickham’s studio.

Wickham returned to the U.S. but much of what she discovered in Japan remains with her. One of her teachers there sternly asked her why she wanted to learn. “It was almost a dressing down, but finally he embraced me. That was kind of a wake-up call; as an American you feel you can just go ahead and learn something but with this kind of skill you have to acquire it in your body by making mistakes … in Japan the term craftsman is a special term used for certain categories of workers and a true craftsman combines speed and precision. It’s kind of like breathing. Why do we continue to work with our hands when we have machines? Because there is a human characteristic of needing to make things.”

Upon return, Wickham came back to the area where she had spent much time growing up. She traveled around, visited sawmills and other wood sources but found it very difficult to find the quality she wanted to work with. She came to the realization that she would have to “make it” herself, along with a partner who had a sawmill of a kind. Enter John Woodward, a machinist by day, who had what Wickham describes as a “kit sawmill” he put together to deal with a log on his own property. “We dragged out his log — it was really heavy and hard but we loved doing it. He decided to invest in a hydraulic sawmill and that’s how we began.” 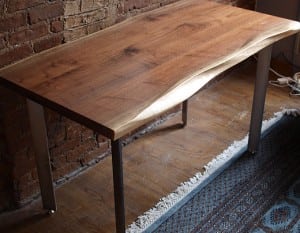 A walnut desk by Jessica Wickham (Photo courtesy of the artist)

Ten years later, after a move from Middletown to Beacon five years ago, after more or less chancing upon her studio space, Wickham continues to be fascinated by the material she is working with.

“Each tree has its own stresses that impact it,” she says, “other trees, wind, etc. A tree is a map of time and those stresses become integral to them. Let it behave on its own terms … You have to find the language of each tree and maintain an integrity and connection between the pieces. There’s a Japanese way of exploring, in a very extensive way, a small range — and finding ways to be inspired by that.”

Wickham Solid Wood Studio is located at 578 Main St., in Beacon. Visit jessicawickham.com, which has extensive details on the process and photos of many of the end results, or phone 917-797-9247 for more information.

2 thoughts on “Into the Woods With Jessica Wickham”