Determining what still needs to be done after eight years

Eight years after its adoption, Philipstown’s Comprehensive Plan is set for a thorough review – not to rewrite it, but to determine what’s been accomplished and what remains to be done.

The Philipstown Town Board kicked off the process Wednesday night (Jan. 22) at a workshop with members of an ad hoc panel (informally created by a handful of Planning Board members and residents) joined Wednesday by a couple more interested citizens. 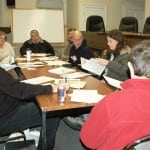 Philipstown Town Board and Planning Board members, joined by interested residents, begin formulating a review of the eight-year-old Comprehensive Plan. Photo by L.S. Armstrong

After going through a preliminary list of 41 topics addressed in the Comprehensive Plan and tentative designation of their current status, the workshop participants concurred that the Town Board should promptly seek applicants for a new Comprehensive Plan review committee and move ahead.

The town Comprehensive Plan does not cover the villages of Cold Spring and Nelsonville, which have their own governmental structure.

In such undertakings, participants “are not suggesting rewriting the Comprehensive Plan,” said Andrew Chmar, a resident and executive director of the Hudson Highlands Land Trust, expressing a view shared by others around the table at Town Hall. “It’s a review of the Comprehensive Plan and what still needs to be done.”

One major project that the Comprehensive Plan called for, a revision of the town zoning code, was finished in 2011 after three years and numerous drafts.

Town Board Member John Van Tassel added that the new review could also consider matters that came up after the Comprehensive Plan’s adoption. The group provided some ready examples for exploration (though not necessarily ultimate action), including definition of an appropriate house footprint size to offer guidance in potential cases of behemoth structures which developers present as single-family homes but which resemble warehouses; sustainability and energy conservation questions; inclusion of a farmland scheme in an overall natural resource plan; affordable housing; and senior citizen concerns. 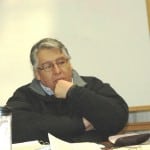 Carlos Salcedo listens to the discussion on reviewing the Philipstown Comprehensive Plan. Photo by L.S. Armstrong

Local resident J. Carlos Salcedo advised that the review reflect “learning from what we did before” and avoidance of old pitfalls, such as those encountered during the protracted rezoning debate. He said that an inadequate socialization or understanding by the public of what was going on encouraged erroneous ideas and statements made in ignorance, until everyone eventually came together and realized that they didn’t have many differences after all.

This time, Planning Board Member Kim Conner put in, “it shouldn’t be long and drawn out” like the rezoning process.

Chmar recommended “a prioritization” of what to tackle first, among the many things the town could pursue. “It’s too big to bite off all this simultaneously,” he cautioned.

Evolution of the Comprehensive Plan

The Town Board adopted the Comprehensive Plan on March 9, 2006, after a lengthy process of public forums and brainstorming sessions, working group studies, consultation with outside experts, and compilation of the basic document and accompanying appendix reports. As its introduction states, the Comprehensive Plan “is not the law.” Rather, “a guide to decision-making on important land-use issues,” it “sets the direction and goals for the community and recommends in a general way how these can be accomplished.”

The plan seeks to  “conserve Philipstown’s rural, historic and river-community character,” enhance its socio-economic diversity, expand recreational opportunities, “control real property taxes and ensure they are reasonable and equitable;” protect Philipstown’s natural resources; improve both the safety and aesthetics of roads, “locate new development where it can be supported by existing infrastructure” and streamline the governmental approval process. Its introduction notes that in order to have weight, the Comprehensive Plan’s recommendations “must be translated into zoning laws, budget allocations, public investments, and other actions that have the force of law.”

Philipstown’s Comprehensive Plan should not be confused with the separate plan launched in the Village of Cold Spring four months after the town plan’s adoption.