This Saturday, April 5, at 8 p.m., at Philipstown.info’s home at 69 Main St., World’s End Theater continues its reading series with a pair of one-act gems directed by Greg Miller.

First up is Slawomir Mrozek’s Out at Sea, a scathing social, economic and political critique veiled under absurdity. Mrozek wrote the play in 1961 under the watchful censors of Soviet-era Poland. Out at Sea features local actors Malachy Cleary, Donald Kimmel, Sterling Swann, George Kimmel and Matt Marino.

Next up is Anton Chekhov’s vaudeville The Bear, a ferocious farce of love and money, set in a Chekhovian drawing room. The Bear features Christine Brooks Bokhour, George Kimmel and Miller.

World’s End Theater readings are free to the public though donations are gratefully accepted. Beverages are available prior to the performance and during intermission. Due to limited seating, early arrival is encouraged. 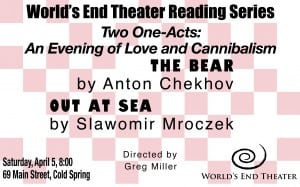