John Vergara is a luthier, or “a maker of stringed instruments.” He is expert in building and repairing not only the most prevalent contemporary instruments: guitar, violin, but a global panorama of them: North African ouds, Azerbaijani tars, and Mexican guitarons, to name but a few. Now Vergara has both set up shop and set up a shop for his two new businesses, in the same premises in Beacon. 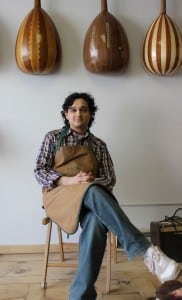 Business No. 1, “Lord of the Strings,” marked its grand opening last month. As indicated by the row of ouds decorating a side wall near the entrance, and the carved violin shapes stacked on nearby shelves, this is where the instruments hold court. Further back, down the long, narrow storefront is business No. 2, a wood shop, dubbed Beacon Woodworkers Club, which will celebrate its official opening on Second Saturday, April 12, where the tagline of “learn, design, create” indicates its purpose of just that.

Both a cooperative and a place for classes, those who choose to become members can book sessions where they can use the equipment and tools for their own projects, which can range from fine art sculptures to crafting a chair or something small. Group workshops, tailored to beginners and intermediates in such topics as measuring and marking, how to operate hand tools and specific equipment such as bandsaws, are available to the public at large.

Members pay an initial membership fee of $50, which covers the cost of orientation and safety/tool certifications, and time block packages range from five hours for $120 to 20 hours for $300 with points in between.

Vergara began this life of instruments in the traditional way: he picked up a guitar and became engrossed in it. So engrossed, unfortunately, that he got tendonitis as a result of obsessive practicing. “It changed the whole path I thought I would go down,” he says, “but in fact it forced me to fuse my love of music and woodworking into one.” 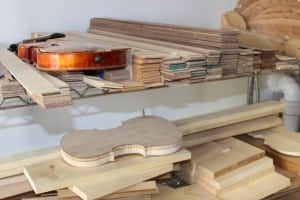 The shelves of a luthier contain very specific wood shapes.

Vergara approached a couple of master guitar makers in the area, asking each to teach him the trade. Both declined and each later passed away, taking that knowledge with them. Vergara turned to violin and approached a violinmaker. “He saved his life by saying yes!”  Vergara jokes. Vergara says that most guitar makers are not violinmakers and vice versa, though they do have one thing in common: the ability to work in solitude. “In this profession you’re working with wood, not with people. You have to master being alone, which some people are not okay with.”

Vergara says he spent the last three years living practically “as a hermit” making and repairing instruments for a largely online, international clientele. His decision to move to Beacon, where he spent about 15 years of his youth — calling himself a product of “both Beacons” — the down-at-the-heels fading industrial town, and the creative types attracted to it — was a conscious choice to interact with the public again.

Falling in love with the Arabic oud

“Working in public means I get less done, but I feel a responsibility to educate and inform people,” Vergara said. “I like when people are curious and ask good questions and expand their knowledge. I work 12 hours a day anyway, but I really like what I do.  Sometimes unique problems in repair require unorthodox solutions, and usually you’re frazzled trying to figure them out, but at the end you feel good … This is literally my dream shop — every woodworker has one. I dreamt of lathes and turning chairs, not entering data.” 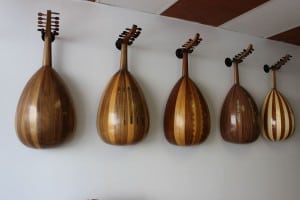 A display of ouds lines a wall at Lord of the Strings.

Traveling through the Middle East years ago, Vergara fell in love with the Arabic oud, which he explains as “spread across so many countries — it’s their guitar. I got that music in my ear and my head and obtained one. Not long after that I decided I wanted to make one.” Full of joints and pieces which require fabrication, the construction of an oud is far more complex than that of a violin, yet the final product costs less, because of a market flooded with cheap knock-offs manufactured in places like Syria in order to make them affordable to people living there. Vergara’s ouds, are the opposite — “the highest professional quality. “I have a niche in the world as an oud maker,” he says.

And people in search of ouds have been finding him. “Oud means wood or twig in Arabic,” Vergara says. “It is the father of the lute and the grandfather of the guitar. I see it as the matriarch of many string instruments. From ancient Persia it crossed North Africa then traveled north to Europe, where it was played during the age of the Moors. Europeans took to the instrument, but they wanted to play harmonies and chords so they put frets on it and called it a lute. From that came the Spanish vihuela, which was a court and salon instrument designed to serenade people in a small room. From that, eventually, came the guitar. All of these instruments can be amplified, but they lose their haunting, earthy sound.”

Having been open just a few weeks, Vergara said that guitars, not surprisingly, were the instruments brought in to him for repair most frequently, but that he had already worked on an upright bass, an Arabic qanun, mandolins, ukuleles, banjos as well as violins. His previous clients have followed him here, but he is also getting many walk-ins from the numerous musicians who live in the Beacon area.

Originally he was planning just the instrument business, but as he got to thinking he remembered how he used to drive to a place in Connecticut, just to “make one cut” on a project. “I realized I could do that here; I have plenty of space for it.”

Vergara bemoans the lack of trade education in contemporary high schools. “If it wasn’t for wood shop I never would have come to this. When I was in high school and tried out a bandsaw I realized I could make all sorts of things — things I had in my head. Now they take away essential skills.” 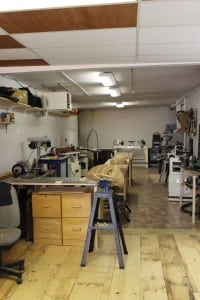 Vergara knows that some people are afraid of machines, but he thinks that’s okay. “It’s good to have a little fear. Here you’ll learn what to do, what not to do and that you shouldn’t be too afraid, just be alert and always think ahead one or two steps before you do something or you could wind up with an error or an injury.”

Vergara is infused with a passion for what he is doing. “Things like this bring meaning to some people. Ultimately everyone needs something that challenges them,” he said. “There’s a beautiful English proverb which says ‘A smooth sea never made a skilled mariner.’”

Lord of the Strings and Beacon Woodworkers Club are both located at 8 South Chestnut St., Beacon. Hours are 5 to 9 p.m. on Wednesday, Thursday and Friday; noon to 8 p.m. on Saturday, noon to 4 p.m. on Sunday; closed Monday and Tuesday. Visit beaconwoodworkersclub.com and johnvergaramusic.com.