A major milestone in the continuing saga of the old Butterfield Hospital site was reached Tuesday (May 13) when the Cold Spring Village Board voted to approve the long-awaited B4A Zoning, paving the way for redevelopment of the 5.7-acre property. By a 4-1 margin, trustees agreed to amend the Village Code, establishing the site as a Medical and Health Care Facility Mixed Use District. 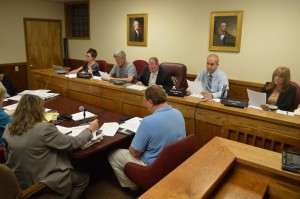 The Cold Spring Village Board approved the B4A zoning for Butterfield by a 4 -1 vote. Trustee Stephanie Hawkins, far left, cast the lone ”No” vote. (Photo by M. Turton)

Trustee Stephanie Hawkins cast the only “no” vote. Prior to the roll-call vote she questioned why the post office was included in the resolution but a senior citizen center was not. Anna Georgiou, special counsel to the Cold Spring Planning Board said there was “no particular reason” — a statement that Chuck Voss, consultant to the Planning Board, agreed with. When Hawkins asked Voss if there were any guarantee that a new post office and senior citizen center would be included in the project he responded “No” to both.

During the public comment period developer Paul Guillaro thanked the Village Board and Planning Board for work in amending the zoning. “It’s been a long, hard road,” he said.

“I’m relieved,” said Mayor Ralph Falloon when he spoke to The Paper the day after the vote. “I’m the kind of person who wants there to be 100 percent support for projects,” he said, referring to Hawkins’ “no” vote. “I believe (the zoning amendment) followed a legal and ethical path to get it done.”

Falloon said that he we will contact U.S. Postal Service officials to make them aware of the zoning change and lobby for locating the Cold Spring post office at Butterfield. He said that USPS officials had been in the village recently to scout possible rental spaces and cautioned that, “The post office does what they want to do.”

With the B4A zoning approved, developer Paul Guillaro, standing, can now proceed with site planning for the Butterfield project. (Photo by M. Turton)

Falloon also said he thinks the senior citizen center will become a reality, “… because of the Ailes’ gift” and that the Village Board “will do everything in its power to see that it happens.” Garrison resident Roger Ailes has pledged $500,000 to help establish a senior citizen center in Cold Spring.

Commenting on pleas from residents for an independent analysis of the financial impact of the Butterfield project, Falloon said that legal advice he received indicated that once the Village Board gave up its lead agency status on the project, shifting that role to the Planning Board, it was not considered good practice to then question the Planning Board’s findings.

In completing the EAF (Environmental Assessment Form), a requirement of the SEQR review, the Planning Board determined the Butterfield project would be tax positive for the village. Residents who called for the independent financial review felt the numbers were inflated.

Contacted by The Paper the day after the vote, Putnam County Legislator Barbara Scuccimarra said she had already placed a call to Guillaro to schedule a meeting to discuss the Butterfield development timeline. She indicated she would also contact county officials at the Office of Senior Resources (formerly Office for the Aging) regarding a proposed senior citizen center. “It’s very exciting that this is finally moving forward,” she said.

Scuccimarra said she “would be thrilled if the post office can wait long enough” to locate at Butterfield. She also said she was surprised that USPS officials recently told her they would consider bringing postal carriers back to Cold Spring if a large enough facility were to be found. Cold Spring’s mail carriers have been working out of the Garrison post office since late January when the Cold Spring post office lease expired and Foodtown began its expansion into the former postal building. Retail postal services in Cold Spring are being conducted out of a trailer adjacent to the site of the old post office.

The lone ‘No’ vote

A 3-D model of the proposed Butterfield development is on display at the Village Hall. (Photo by M. Turton)

Hawkins explained her vote in an email to The Paper the morning after the meeting. “I strongly support development at the Butterfield property, however, the B4A Zoning Amendment and documents said to justify it do not ensure county funding for a senior center or a lease with the post office,” she wrote. “The concept plan illustrates massive buildings inconsistent with their surroundings, and among other issues, the developer’s financial projections fail to address impacts of municipal use on tax revenues, or long term impacts on our village’s credit worthiness.”

Hawkins said she was disappointed “but not surprised” by the work of the Planning Board and the consultants hired to perform the SEQR review. “I do not believe their work reflects the best interests of our village” she wrote, adding that by voting yes the Village Board had “… guaranteed a zoning change in exchange for no guarantee of amenities.”

A fundraiser for St. Jude Children’s Research Hospital that the Redrum Motorcycle Club hoped to hold at Mayor’s Park this summer has been moved to Cornwall, New York. Cold Spring resident and Redrum member Mike Halpin helped organize a similar event last year that raised about $2,000 for the hospital. Several police departments monitored the 2013 event. The Village Board’s discussion of the 2014 event application included a recommendation from the Cold Spring Police Department that 10 CSPD officers be on duty during the fundraiser.

There was some debate over whether the village or Redrum should be responsible for the cost of policing estimated at $2,000. Redrum recently moved the event to Cornwall. In addressing issues surrounding the relocation, Falloon clarified remarks he had made previously. “I apologize to Mr. Halpin and his family … (Redrum) is a group of motorcycle riders. We didn’t call them a gang,” and explained that last year “Law enforcement was cracking down.” The police presence was extensive in 2013 mainly out of fears of possible repercussions in the wake of a vicious attack on the Old Bones Motorcycle Club that had taken place on Route 9 a few months prior to last year’s Redrum fundraiser.

Trustee Cathryn Fadde reported that the newly reconstituted Parking Committee is updating data from the original parking survey. Metering, signage and municipal parking are among issues that the group is examining. Fadde also said that she would soon present suggested fees for cruise boats using the Cold Spring dock this summer and fall. One new twist could see Seastreak’s boats visit Cold Spring as part of First Fridays beginning in August. Last year boats arrived on Saturdays and Sundays only during the fall.

Trustee Mike Bowman is seeking quotes for the purchase of video equipment to document village meetings. During the public comment period residents supported the idea, but stressed that videos produced should be a complete, unedited record of meetings.