Throwback to an era of traveling circuses, some animal rights activists protest conditions

The Cole Brothers Circus “24-hour Man” arrives on June 1 in Middletown, and by June 4, he’ll have moved on to Wappingers, stopping in Garfield, New Jersey, in between. 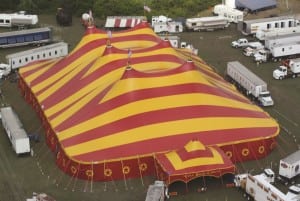 The 24-hour man is the advance man, traveling a day ahead of everyone else. He prepares, reviews and measures each show ground for the arrival of the 115 people-strong circus the next day. The convoy includes 23 diesel-powered tractor trailers, 30 private RV units which help transport 11 self-contained restroom units and 4 diesel-powered generator plants providing electricity, not to mention the human and animal cargo of aerialists, clowns, ringmasters, elephants, camels and ponies which together add up to a traveling circus.

From March through November it is a long circus season — hundreds of shows — typically two shows a day, three on Saturdays, seven days a week at over 100 venues across a span of about 10,000 miles, across half the country — rain or shine — under a huge tent measuring 136 feet wide by 186 feet long.

“W.W. Cole’s New Colossal Shows” debuted in 1884 and were described then as “presented in a reputable manner by reputable people.” Carried by horse-drawn wagons or on dozens of railroad cars, they crisscrossed the North American Continent bringing entertainment to the public. Around the turn of the century, the name was changed to “Cole Bros. Circus” and the circus traveled farther, crossing to the western frontier, performing at mining camps and remote boomtowns. Surviving through the Great Depression, Cole Bros. Circus strengthened during the ‘30s.

With television usurping the nation’s leisure attention during the ‘50s, Ringling North stopped performing under tents. They moved into arenas, and switched from rail cars to trucks, but Cole Bros. continued the tradition of the tents and does to this day, presenting their 3-ring circus before an audience of over 2,000. 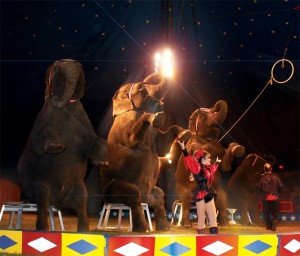 For a number of years Cole Bros. has been targeted for protest by animal rights’ supporters and activists, some affiliated with organized groups, others independent, who feel that conditions for the animals, including traveling in the RVs, are inhumane. A quick web search reveals many such incidences, along with attestations from representatives of the circus, that the accusations are unfounded and that they regularly pass frequent inspections from the U.S. Department of Agriculture.

News coverage from an earlier stop on the tour, Bluffton, Georgia, as described by savannahnow.com, was consistent with similar reports from other itinerary stops: “Protestors held signs and distributed informational pamphlets to the crowds walking into the shows … Harassing the public was not the group’s goal,” Bluffton resident and protester Marisa Goodrich said. “We’re not here to deter anyone from coming, but we do want them to make their own decisions with all the facts on hand,” Goodrich said.

The same site detailed that in July 2011, the U.S. Department of Agriculture cited Cole Bros. for violations of the Animal Welfare Act that included failure to provide proper veterinary care and nutrition for its elephants. Those charges were settled after the circus paid a $15,000 fine in October 2012.

Cole Bros. Circus will perform at Dutchess County Stadium in Wappingers from Thursday to Saturday, June 5 to 7. Tickets can be ordered at gotothecircus.com.