Keep an eye on basil plants

As is happening all too often in our connected world, plant pathogens are spreading quickly and easily. The most recent alert has gone out about basil, a favorite cooking herb. Downy mildew, a fungus, has been identified in more than a dozen states with reports from growers and gardeners alike so far. Infected plants have been found in both the garden centers of big box stores, including a local identification from a Home Depot in Brewster, and nurseries.

Once the plants have made it into chain stores, stopping the spread of a pathogen becomes that much more difficult. They can be shipped around the country and before you know it, entire crops can be lost.

Downy mildew on basil was first reported in the United States in Florida in 2007. In 2008, it was found on plants in eight states along the East Coast, including New York. By 2009, it had spread to western states and Hawaii had reported it by 2011. Most of the states in America had reported basil downy mildew by 2012. By tracking its spread every year, plant pathologists try to alert the supply chain and growers that they need to take precautions to limit the damage and spread.

Downy mildew results in the complete loss of the basil plant and can destroy entire crop seasons. It’s spread through both contaminated seeds and spores on contaminated plants that become wind-borne. It favors conditions that are cool and wet, similar to late blight.

Downy mildew was in the news frequently last year because of a strain that was infecting impatiens. In a matter of days, a planting of impatiens would wither and die, much to the frustration of landscapers.

Jennifer Stengle, environmental horticulture and natural resources community educator for the Cornell Cooperative Extension in Putnam County, notes: “Many plants have their own specific species of downy mildew that infect them. For example, impatiens downy mildew only affects some species in the impatiens group and not all species. Likewise basil downy mildew or coleus downy mildew attack basil and coleus respectively, but don’t ‘cross borders.’” Grapes, cucumbers, salvia and spinach also have a strain of downy mildew contamination.

If you have basil plants or are planning to purchase some, look for yellowing on the leaves that stays within the veins on the top of the leaf. On the underside, spores may be visible or the leaves may have black spotting. There are additional images online to help identify it. Of course, if the plant appears unhealthy in any way, don’t buy it.

If you notice symptoms of infection on a basil plant in your garden, Stengle’s best advice is to make pesto immediately. “Seriously,” she said, “once they see the symptoms there is only a short time to harvest or use. Loss of the entire plant is quick.” 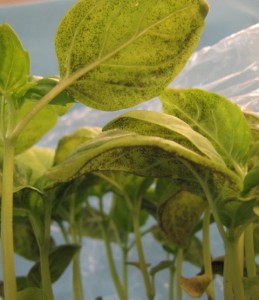 Say you’re a basil lover and have a significant planting that you want to save. There is slight hope, but the odds aren’t great. Stengle said, “There are some fungicides approved for use in the home garden: these include potassium bicarbonate (Milstop), hydrogen peroxide-based fungicides (like Oxidate) and neem oil. While they may provide suppression and protect new emerging leaves, they do not save the infected plant parts. In addition, even when carefully applied, they may damage tender new foliage.”

Infected plants and plant parts should be removed from the garden and carefully bagged to prevent the spores from being released on a windy, humid day to pass on to your neighbor’s plants. Share any positive identification with the local cooperative extension office to contribute to the data bank about how widespread the damage extends, too. An online spreadsheet maintained by a Cornell plant pathologist already has 45 reports and it’s still relatively early in the season.

While the spread of pathogens isn’t necessarily a trend connected to global warming, it is definitely a symptom of shipping vegetables and herbs long distances. Most supermarket produce travels 1,500 miles to the store shelf. The first incidences of basil downy mildew were genetically identical to a strain from Switzerland, where it was first reported in 2001. About 20 percent of basil in the U.S. is imported, some of it from Switzerland. So it goes. Enjoy that fresh, summertime pesto while you can.