Speed in the field and on the bases

Lifelong Cold Spring resident George Stevenson is one of those rare individuals blessed with considerable talent in two very different areas of life — athletics and art. In recent years he has been better known for the latter; his colorful, primitive-style paintings having been shown in New York City and numerous local venues. 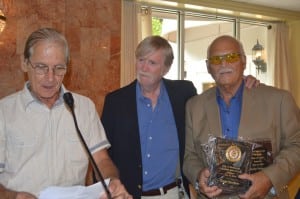 But it was the athletic prowess he enjoyed in his younger years that Stevenson was honored for on Sunday (July 13) when he was inducted into the City of Newburgh Fast Pitch Softball Hall of Fame to the hearty applause of friends, family, old teammates and even good-natured former foes on the field. Stevenson played fastball in Newburgh during the 1968 and 1969 seasons and then again after his return from the Vietnam War, where he was awarded a Purple Heart for injuries he suffered in battle there.

After coming back to the U.S., Stevenson resumed his working life and renewed his exploits on the softball field but soon suffered a stroke, which resulted in him losing the use of his right arm and right leg and limited his ability to speak.

A higher power had plans for George

Sunday’s ceremony was held at Anthony’s Pier 9 in New Windsor and was attended by more than 50 Hall of Fame officials, former players and their families. His friend and former teammate Bill DiCastro spoke on Stevenson’s behalf.

“A higher power must have had plans for George,” DiCastro said, referring to the challenges Stevenson has overcome and the success he has enjoyed. “He survived, learned to paint left handed and became a well known artist.”

But Sunday was about softball and Stevenson’s ability to play it exceptionally well. The printed program described him this way: “Stevenson played outfield for Gallagher’s Restaurant and had great speed in both the field and running the bases. He was a .279 hitter and could come through with a hit when it was needed. George was a member of the team when they won the championship. His friends consider him to be an outstanding individual.” Stevenson was presented with two plaques, one of which will be permanently housed in the Hall of Fame. 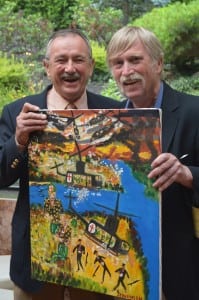 After being inducted into the Hall of Fame, George Stevenson, right, presented his friend, former teammate and fellow Vietnam vet Pat Kelliher, with one of his paintings.

After he was inducted, Stevenson put a compelling and generous twist on the afternoon’s proceedings. In the audience was Pat Kelliher, a friend and former teammate, fellow member of the Hall of Fame and a veteran who served in Vietnam at the same time as Stevenson. In a brief and moving private ceremony, Stevenson presented Kelliher with one of his paintings. It depicts a scene from the Vietnam War in which helicopters are prominently featured. Kelliher wasa helicopter door gunner while serving in Vietnam.

Established in 1991, the Newburgh Fast Pitch Softball Hall of Fame now has more than 230 members. Alfred T. Muscarella and Nicholas Muscarella were inducted along with Stevenson as part of the organization’s 23rd annual dinner. The Blue Devil Booster Club ran a full-page advertisement in the ceremony’s program, congratulating Stevenson, a star athlete at Haldane High School in the 1960s.