In an oft-told tale, Manya Tessler and Roumen Vragov, a jewelry designer and an economics professor, first journeyed to Cold Spring 10 years ago on a day trip. A very positive impression was made.

Confirmed nature lovers with an interest in preserving the environment, they’re also train enthusiasts. Their work has taken them to Chicago on occasion and when they traveled via that method the beauty of the Hudson Valley called out to them. Now, just a year and a half after deciding to relocate here from New York City, they have taken two big leaps, buying a home and opening a new Main Street gallery, Open Concept, which showcases not only Tessler’s hand-carved, cast in gold and silver fine jewelry, but the work — and processes, hence the name of their business — of other contemporary accessories artists whom they admire. 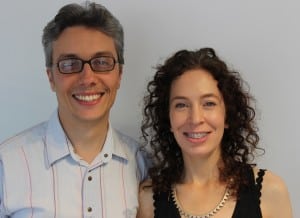 Roumen Vragov and Manya Tessler (Photo by A. Rooney)

The love of nature is more than evident in Tessler’s designs; all her work stems from it. Large, bold yet delicate representations of wildlife — birds, lizards, frogs, a mouse — sculptural and intricate, come to 18-carat gold and sterling silver life, often with gemstone accents, perched atop “branches” or astride a circular ring. Or, frequently, the creature is the ring — a snail’s head meeting its tail, forming a circle.

The connection between buyer and a particular piece of jewelry is often palpable, according to Vrakov, who exclaims, “I find it amazing that Manya is able to inspire personality into these animals. People actually name their rings!”

Working from a home studio, usually on several pieces concurrently, each of which can take months to complete, Tessler first carves her designs into a piece of resin wax. The work is painstaking and intricate, abetted with implements more often found in dental practices and welding shops, a warren of small tools and small, almost mysterious containers. Researching her subjects through photographs, she digs ridges, smoothes, engraves, measures, and hones, transforming blocks of wax into designs both fanciful and realistic at the same time.

Working with the wax, just one of the stages in the creation of a ring.  (Photo by A. Rooney)

“I love wax more than metal; it’s tactile and forgiving,” Tessler says. This transformed wax model is then brought into the city, where it is made into a silicone mold, into which more wax is injected and from which a model is created — a process begun centuries ago, in ancient Egypt and the beginning of a multi-step process today: wax is injected into the mold and this wax is perfected further.

The work is then brought to a “caster” who produces a metal version. Further refinement and polishing take place, a master model is produced and that returns to the city and becomes a different kind of mold. The process continues from there when orders come in, with sizing, further detailing and, in some cases, stone carving. Such finely calibrated work doesn’t always turn out correctly. “The success depends on multiple factors,” Tessler says. “You have to get all of them right and that’s not always possible.”

Tessler, who grew up in Philadelphia, studied printmaking at Wesleyan, then, after three years spent teaching English and Spanish in Japan, turned to illustration. Earning an MFA in that field from the School of Visual Arts she wrote and illustrated a children’s book set in the Japanese countryside. Intending to learn how to create the couple’s wedding rings in a way reflecting their passion for art and nature, Tessler took a jewelry design class at the 92nd Street Y and “fell in love with the process. Even when I was working in illustration, I always felt more comfortable working in 3D — it just seems more natural for me,” she says.

Vragov, who is the business side of the pair but also contributes artistic ideas, concepts and critiques, was born in Bulgaria and came to the United States first as an exchange student, eventually earning a Ph.D. in economics at the University of Arizona. He met Tessler while at his first job as a professor, at Baruch College. He currently teaches “infoeconomics”, a discipline combining economics with information technology: how to use technology to improve business and why people make the decisions they do, at Mount St. Mary College in Newburgh.

Tessler and Vragov formed their company six years ago. That same year, their first collection received the Mort Abelson New Designer of the Year Award at the Jewelers of America New York trade show. They will now sell their collection solely in-house and at the One Of A Kind Show and Sale in Chicago, no longer traveling to smaller wholesaler shows elsewhere as they have done in the past.

While there is a focus on the rings in the gallery, the designs have also been used on necklaces and other forms, and some of their work has been and will continue to be commissioned, with buyers sometimes seeking different stones, for example, or supplying a stone of their own to use.

Always intended as a showroom for more than their own pieces, Open Concept grew from the couple’s admiration for the work of their peers, and a desire to learn about how other artists create unique pieces. Excerpted notes from their site describe several of these:

Irina Grammatina, who hand-paints flora onto silk scarves; MariClaro, who upcycles the innards of old cars to make sleek messenger bags; Jaclyn Davidson, a steel jewelry artist who creates collars and cuffs and sets them with white diamonds; Gregg Burgard, a glass jewelry artist who uses pate de verre to create nature-inspired pendants that shimmer and reveal different colors depending on the light; Selin Kent, who utilizes CAD to invent cutting-edge rings and necklaces out of silver and gold; Molly M, who laser-cuts jewelry out of wood, leather, and fabrics to create light-weight wearable fun necklaces and earrings; Tracey Tanner, who makes leather wallets, purses, and pouches and dyes them in metallic, pastel, and saturated colors; Monica Knuttson, who travels throughout her native Europe to find Victorian lace, which she hand-dips in silver and gold; and Stelluca, who upcycles used sails from sailboats to make handy clutches.

Throughout the year, guest artists will exhibit and discuss their work at Open Concept and there will be trunk shows. Tessler and Vragov donate 5 percent of all proceeds from their own jewelry line to local animal charities.

“We originally moved to Cold Spring just to live here,” Tessler says. “We love traveling but we have two dogs and a cat and we needed to settle down. We looked all over: Vancouver, San Francisco, Chicago, but this is the place we fell in love with. Everyone here has been so supportive; it’s a creative, inspiring community. We’re happy to be here.”

For more information visit openconceptgallery.com and manyaandroumen.com, which has more photos of their own jewelry. There is also a Facebook page. Open Concept is located at 125 Main St., Cold Spring; current hours are Thursday through Monday, noon to 6 p.m. or any time by appointment.