Trustees for the Haldane Board of Education have begun a discussion that could lead to a later start to the school day – and if such a change takes place it will likely affect all grades, kindergarten through 12. The idea of shifting school hours has been around for many years, but the discussion at the board’s Tuesday (Sept. 2) meeting seems to indicate that educators are now looking at it more seriously. No decision was reached however the board did agree to hold a workshop later this year to focus on the issues involved. 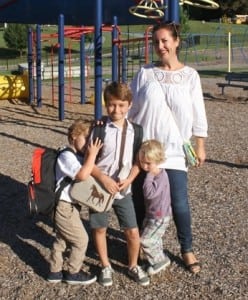 The surge in interest in changing school hours is due in large part to a recent policy statement issued by the American Academy of Pediatrics (AAP) and highlighted in the September 2014 issue of Pediatrics. The statement indicates that teenagers experience a cycle that has them go to sleep and awaken up to two hours later than other age groups.

More importantly, AAP said that starting school too early is a major factor in chronic sleep deprivation in adolescents. According to the National Sleep Foundation inadequate sleep can hinder learning, listening, concentration and problem solving among adolescents. It can also lead to aggressive behavior, unhealthy eating and contribute to illness.

An Aug. 25, 2014 Washington Post article dealing with the AAP recommendations that was distributed at the meeting states that the vast majority of teens in the U.S. don’t get the recommended 9 and one-quarter hours of sleep required for them to function at their best. The article also said that only approximately 15 percent of U.S. high schools start at 8:30 or later.

The AAP is recommending that middle and high schools not start classes any earlier than 8:30 in order to help students to get 8.5 to 9.5 hours of sleep each night. The article also indicates that school districts that have changed their school hours have cited improved academic performance and a decrease in students arriving late to school.

At Haldane currently, high school and middle school students attend classes from 7:33 a.m. to 2:14 p.m. while the school day for elementary school students runs from 8:35 a.m. to 3:05 p.m.

The reasons behind adolescents not getting enough sleep are varied and include such factors as extracurricular activities, homework, part-time jobs after school and late-night use of technological devices. And according to the National Sleep Foundation biological sleep patterns make it natural for adolescents not to be able to fall asleep before 11 p.m.

In an interview after Tuesday’s meeting Haldane’s Superintendent of Schools Diana Bowers told The Paper that trustees have expressed no opposition to the notion of changing school hours and that the real challenge will be “how to coordinate logistics and deal with things that get in the way” of such a move.

She said the discussion will have to look at all grades K through 12 because any such changes “would affect everyone.” As an example she said that a typical logistical concern among parents is the need to have older students home from school in time to take care of their younger siblings.

Change will have ripple effects

“There (would be) a lot of ripple effects,” Bowers said of the contemplated change in start time. She listed the affect on families, childcare, sports teams, and transportation as major issues to be addressed. In addition, she said coordination with other school districts and BOCES would be required. Bowers expects the topic will be raised at upcoming regional superintendent meetings as well.

The workshop devoted to an in-depth discussion of a potential shift in hours will likely take place in December. Bowers pointed out that a recommendation to have classes begin no earlier than 8:30 would also have to take into account any potential impacts on the budget and be made in time to be included as part of the budget process.

This is hardly a new subject for Bowers or her colleagues in education. “I’ve been an educator for 33 years and this subject has come up every year,” she said. The difference now, she said, is that the AAP is advocating change. As a former science teacher who has followed recent brain research, Bowers said she believes there is validity to what AAP is recommending.

In an email to The Paper, Haldane School Board President Joe Curto said that it is early in the process for him to comment in detail. “Given the source of the report (AAP), it cannot go ignored by the board or the school community. The science appears sound,” he said. “With anything of this magnitude it will require a comprehensive dialogue … with the entire school community.”

He said that Bowers will now review the issue with administration and teachers before providing the school board with “an overview of how and why this should happen,” adding that “like all issues of substance, we’ll handle it intelligently and with thorough diligence.”

Curto urged community members to look at suggested guidelines from the National Sleep Foundation on how communities can deal with the time changes being considered. Learn more about adolescent sleep needs, patterns and tips at sleepfoundation.org.