Depot Docs will open its ninth season of bringing remarkable documentary films and filmmakers to the Philipstown Depot Theatre on Friday, Sept. 26, with a showing of The Central Park Five. Based on the 2011 book by Sarah Burns, the film gives “The Untold Story Behind One of New York City’s Most Infamous Crimes” an immediate and visceral life that is the singular power of the moving image, with its magic of light and sound. 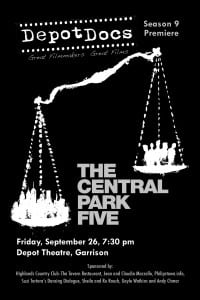 The fact that Sarah Burns is the daughter of one of the most celebrated magicians of the form, Ken Burns, who is credited with co-writing, co-producing, and co-directing the film with Sarah Burns and her husband, David McMahon, might lead us to expect that we’ll be watching a “Ken Burns” documentary, with lots of the patented technique that is as much his claim to fame as the films themselves. But in The Central Park Five, perhaps because it began life as Sarah Burns’ passion-driven book, the technical wizardry is in complete service to the story, and the story is told, not by an engaging narrative voice-over, or a gaggle of talking heads, but, for the most part, by the Five themselves. And what a story.

It’s 1989 in New York City — ancient history for some of us, a still vivid hallucinatory time for those who lived the experience — and a 28-year-old white woman, Trisha Meili (then known only as “the Central Park Jogger”) is found bound, gagged, badly beaten, raped, and nearly dead in Central Park in the early hours of an April morning. For a city with an ever-increasing cost of living, shrinking jobs and housing markets, growing wealth disparities, street crime and AIDS on the rise, and an out-of-control crack epidemic, this was a torch to tinder.

The usual suspects, at that moment in time black and Latino teenage boys who spent a lot of time on the streets in the vicinity of the park, were already in custody, rounded up after complaints came in to the Central Park West police precinct that gangs of kids were roaming the park, harassing and assaulting people.

Of those brought in, five of them, Raymond Santana, Antron McCray, Kevin Richardson, Yusef Salaam, and Korey Wise, ages 14 to 16, were accused of the attack. The principal evidence, in fact the only evidence, was confessions wrung out of all the boys after hours of interrogation by the police. The confessions, though not the interrogations, were filmed, and they are painful to watch, especially with the knowledge that they were extracted from scared, intimidated kids who were promised leniency and hope of freedom if they snitched, and that coerced confessions are an all too common tool of the police trade.

They recanted those confessions almost immediately, but in the media feeding frenzy that followed and found them guilty as charged, the boys were sentenced to long prison terms. And the story might have ended for them there, as it has for so many men of color in the age of mass incarceration, with lives blighted by prison sentences and little hope for redemption, if Korey Wise, doing time in Auburn Correctional Facility, upstate, hadn’t gotten into a conversation with another prisoner, Matias Reyes. Reyes had attacked and raped Meili, and he told a corrections officer that Wise was innocent of the crime.

DNA evidence collected at the scene, which never matched any of the Five, was positive for Reyes. In 2002, Judge Charles Tejada overturned the convictions, and after serving from seven to 13 years in prison, The Central Park Five were exonerated. And in June of 2014, after waging a fierce legal battle against their lawsuit for several years, the City of New York settled, paying out a total of $40 million.

Race at the heart of national narrative

Most of the reviews and commentary on the film, after its festival and theatrical run and PBS showing, have focused on the fact that, with Ken Burns on the marquee and the credits and so visibly identified with the film, it must be a “Ken Burns film,” just … different. Burns takes a larger view, and gives much of the credit to his daughter. He says:

The people who are aware of the case, most of them, believe the Central Park Five were let go on a technicality. No, they served their full sentences. “Well they must have done something wrong that night.” That’s the default position, and that’s where “the other” comes in, where race comes in. That’s where this age-old struggle that’s not just familiar in this story, but familiar in so many of the stories that we’ve tried to tell. From The Civil War and The Statue of Liberty to Jazz and Baseball. Race is at the heart of this national narrative, whether we want to admit it or not. And given the outcome, given how their blasted hopes seemed so tragic, it was time to tell the story. And God bless Sarah for having the guts to do it, and for earning their trust, and after several years, they finally understood that Sarah was genuine and sincere and wanted to hear who they are.

The Central Park Five will be shown on Friday, Sept. 26, 7:30 p.m., at the Philipstown Depot Theatre, Garrison’s Landing. Co-directors Sarah Burns and David McMahon will be present for a Q-and-A and reception after the screening. For more information call 845-424-3900, or go to philipstowndepottheatre.org. For tickets (recommended) go to brownpapertickets.com.