Peter Hoffmann launches a header in the Senior Night game versus YMA. Decorations by Jill Heitmann and Santa Warren. (Photo by Scott Warren)

Senior Night on Oct. 16 was a win for Haldane versus YMA, 4-0. Peter Close and Danny Heitmann scored, and Ramsey Heitmann contributed two goals.

The boys finished their season 10-6 on Oct. 18 with a 2-0 win at Peekskill; goalie Peter Hoffmann with a clean sheet, and Draper and Seth Warren with goals.

Tuesday, Oct. 20, was Girls’ Senior Night versus YMA. In a crushing 7-0 victory, two goals were scored by McCollum. Lisikatos, Hannah Monteleone, Martin and Jacoby contributed one each; Alzy Cinquanta got her first varsity goal. Labriola, who has been strong in previous games, had a reprieve, never needing to make a save the entire game.

Haldane girls ended their season 12-4. Three seniors and their parents were recognized: Allie Monteleone with five years on varsity along with Jacoby and Jordan Erickson. 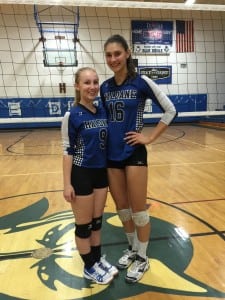 After the win over Class AA Ketcham in three sets the day before, the girls went on to a big upset over Class AA Mahopac in four sets. On Oct. 17 they lost 3-1 against undefeated Class A Yorktown. Kelly Vahos achieved her 1,000th career kill during this game.

On Senior Night, Oct. 21, they won in three against John Jay to end their season at 16-2. Seniors Vahos and Fiona Mueller were acknowledged for their contributions to the team along with their parents. Sectional games are anticipated to begin at home either Tuesday, Oct. 28 or Thursday, Oct. 30.

At the Section 1 Coaches’ Invitational on Saturday, Oct. 18, at Bowdoin Park, Nick Farrell, with a time of 17:48, captured the only Haldane medal of the event. Farrell is individually ranked 31st in New York state, Class D. Brian Haines finished second with a time of 18:41, followed by first-year runner Eric Rizzi in third, Theo Henderson fourth and Jake Howell fifth. Both Rizzi and Howell ran personal best times.

The girls took to the course wearing their pink socks in recognition of Breast Cancer Awareness Month and added a teal ribbon to their hair ties to recognize ovarian cancer and commemorate a member of the coach’s family.

Taylor Farrell led the way for the girls at 21:33, with Ruby McEwen at 21:48 and Kaitlyn Phillips at 22:19. Heather Winne came in at 23:53 and Samantha Ricketts was fifth for the Blue Devils. Abbey Stowell and Sophia Carnabuci rounded out the field of seven.

The Blue Devils stayed strong, finishing their season 4-3 with a loss (41-26) to the Eagles on Oct. 18 at Dobbs Ferry. Fans were on the edge of their bleachers early in the third quarter as the Devils ran in two touchdowns to lead 28-26. Then the Eagles returned an 85-yard kickoff for a TD. Coach Ryan McConville acknowledged the Devils could not recover. “I was proud that we were able to fight to get back in the game, but we didn’t do enough to win the game.”

Football Senior Night was held at Homecoming, but fans have another chance to cheer for their Blue Devils at home in a matchup versus Croton on Saturday, Oct. 25. Kickoff is set for 2 p.m.

Haldane will line up to tame the Tuckahoe Tigers in the Section 1/Class D Championships on Saturday, Nov. 8, at 3:30 p.m. at Mahopac High School.