Beacon is on the move, in more ways than one. Three Beacon establishments, eager to expand, have either just done so or will be doing so soon. Beacon Bath and Bubble hopped, skipped and jumped next door to larger premises, while Beacon Pantry just this week did the same, moving to a much larger space a short way further east on Main Street. And, in an even bigger shift, The Beacon Bagel will be doubling its floor space, heading west, with a projected opening date in its new space of “around Mother’s Day.”

Beacon Bath and Bubble heralded their new move with this recent announcement:

Starting in January, 458 Main will be our new home, right next door to our current location. The new location will feature a huge production space where customers can see our wonderful products being made. We’re also going to mix things up with something new and unique: We will offer old fashioned, vintage and retro soda pop in 36 brands! You can once again enjoy a bubbly soda pop from yesteryear, both in-house or to bring home as a customized six-pack. We also will house the 3B Art Gallery, featuring art from high school students throughout the Hudson Valley. 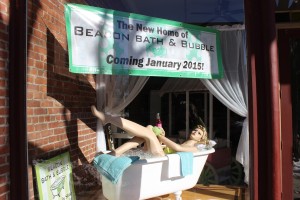 Beacon Bath and Bubble has reopened, just a door away from its former location.

For Beacon Pantry owner Stacey Penlon, the timing couldn’t be better. Her former space was almost immediately too small and lacked a kitchen. Business has been brisk since her opening a year ago, and when one of her customers kept talking about the renovations she was doing on a property elsewhere in Beacon, dropping hints about the food-related businesses and organizations already located there (Hudson Valley Table and Hudson Valley Seed are two of the upstairs tenants), and “subtly mentioned her desire for a food establishment,”

Penlon caught on, came to check it out and found it ideal, particularly as her old lease was ending just as the new space was becoming habitable. 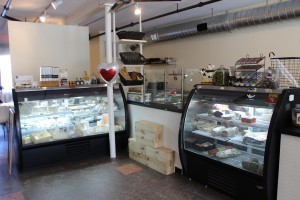 Now the cheese and the charcuterie each has its own dedicated case at Beacon Pantry’s expanded premises.

“It couldn’t have been more perfect — it was a chance to get in on the ground floor while things were being renovated, and be able to give input into the decision-making with the electric and other things,” Penlon noted.

Now, the formerly cramped quarters are expansive, with large, individually dedicated cases for an expanded line of cheeses and, separately, charcuterie. There is café table seating both indoors and, come the warmer weather, outdoors both in front and back, as well as a parking lot in the back. A galley kitchen and an additional 750 square feet of space in the rear will allow for a dedicated event space, not only for the in-house cheese tastings that Beacon Pantry has been holding, but for rentals, for instance if someone wants to conduct a cooking class. 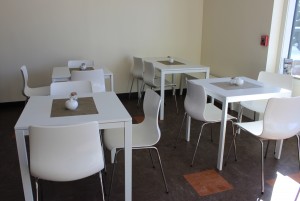 Beacon Pantry now has the space for in-house dining; outdoor dining will be available, too, in the warmer weather.

In addition, they will soon have Stumptown Roasters espresso drinks — there was no room for the espresso machine before, and they have a wine license as well. “We always knew that [the previous] space was really difficult,” Penlon said. “I am surprised that we were able to grow this fast, but that’s Beacon for you: very, very supportive.”

Art Burns, The Beacon Bagel’s gregarious and energetic owner, has had his share of proposals from people in nearby cities in towns, asking if he would open another branch of his very popular establishment elsewhere. While he has been interested, he has also been just too busy managing what he already has, and figuring out how to expand locally to accommodate the constant flow of patrons who stream in and hang out through the day.

The right opportunity finally presented itself when he got the idea, last summer, of approaching Brendan McAlpine, of McAlpine Construction, who developed the nearby Roundhouse at Beacon Falls, with a proposal to join together to secure a foreclosed building, owned by the City of Beacon and left vacant for what both men say is at least over 15 years.

“He liked my plan and jumped in with both feet,” Burns said. The two participated in a proposal process, along with two other bidders, detailing their plans for what they wanted to do with the space. “The city council overwhelmingly supported us,” Burns enthused. “We each have a solid background in different things; his [McAlpine’s] is in site development — making something beautiful out of abandoned buildings, and mine is food. We’ll overlap, but it’s like a jigsaw puzzle — he will focus on the space, while I’m the food and staffing person — it’s a perfect blend.” 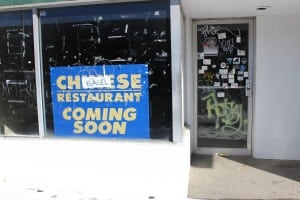 Vacant for many years, 328 Main St. in Beacon is to become the expanded home of The Beacon Bagel come this May.

The space, long identified with a sign saying, “Chinese Restaurant Coming Soon” (“soon” having a very loose definition, it seems), is close to the recently renovated Rite Aid store in the center of Main Street. It offers twice the floor space of The Beacon Bagel’s current premises, as well as the all-important parking (Burns said that he gets told at least a few times a week by patrons that they came by earlier but couldn’t find a spot and drove off).

So, the big question, which was asked about once every 10 seconds this past Wednesday by customers coming in while this interview was being conducted, is: “What’s it going to be and when are you opening? ”The answer is, according to Burns: “We’re going to have exactly what we have now; nothing is not going to be there, but we’re also reinventing all of our sandwiches as plated dishes, so while there will still be an egg sandwich, we’ll also have omelets with home fries, that kind of thing.”

Burns said he’s been “waiting for the time and opportunity to be right. This is the combination of the right space and the right partner; I couldn’t be more excited.”

Beacon Pantry is now located at 382 Main while, come May, The Beacon Bagel, currently at 466 Main, will be found at 328 Main — the name will remain the same. For details on a charitable local food donation system that Art Burns is organizing, in conjunction with other businesses, see the article on Beacon food businesses helping to feed the needy.