For Cold Spring artist Jaanika Peerna, her upcoming exhibition at Brooklyn’s Kentler International Drawing Space represents a trio of exciting firsts: her first solo show at a major New York City gallery, the first complete freedom she has enjoyed in choosing precisely what to show there and the first time a book devoted to her work has been published.

The exhibit, called Light Matter, opens on Feb. 13 and runs through March 31, with an artist talk and performance scheduled for March 7 at 4 p.m. The book, Storms and Silences, focuses on work from the last decade of her career, including drawings, installation and performances. It includes a series of drawings called Storm Series, which began right after Hurricane Irene hit this area.

In addition, Peerna will be giving two other talks, one locally at the Desmond-Fish Library on Feb. 26 at 7 p.m. and the other at the New York Public Library at 455 Fifth Ave. on March 13 at 6 p.m. 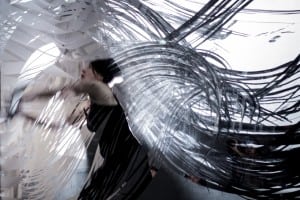 As a nonprofit space that promotes drawing, Kentler International Drawing Space was familiar with Peerna’s work through the flat files they maintain of many artists’ work. “They knew a little bit about my work over the past two or three years,” Peerna said. “They noticed what I did in Europe and thought my work would be a good opening exhibition for their 25th anniversary,” one of four quarterly solo exhibitions to be mounted in 2015. With a large space to inhabit, Peerna has enjoyed the process of determining how best to fill it.

Peerna spent months this past fall, producing new work and considering the space where she would display it, before heading to Venice for all of January to spend the month as artist in residence at Scuola di Grafica, preparing for a solo exhibition there relating to the phenomenon of acqua alta (high water). She is creating a site-specific exhibition inspired by factual and experiential information found during her residency in Venice. She’s no stranger to exhibiting on other continents and her work has been shown in Paris, Moscow, Berlin, Helsinki, Ravenna, Sydney and Dubai.

Crisscrossing between and within continents is no novelty for the Estonian-born artist — sojourns have taken her to Helsinki and Berlin for long stretches of her adult life. Growing up in Estonia, Peerna’s first dream was to become a figure skater. “My parents realized the desire in me and allowed me to stay up late and watch; I felt that my excitement was taken seriously. I practiced with my brother’s big hockey skates. I was fascinated by what you could draw on ice with skates and the marks they left.” This deep interest in lines has coursed through most of Peerna’s work as an artist since, sometimes intentionally, other times subliminally. 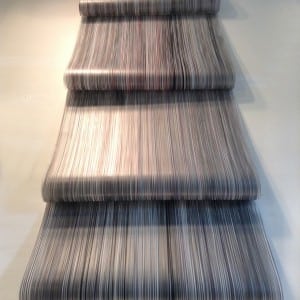 Initial training, at the Tallinn Pedagogical University in Estonia, was, Peerna recalled, “very vigorous and disciplined. I got my first degree, in art education, at the very beginning of Estonian independence when there was still Soviet-style educational methods in place. For instance we could only create from life: still lifes, portraits, landscapes, with no abstraction allowed. So I do have that training in me, but I’ve never done anything figurative since.”

After graduating with that first degree, Peerna became the youngest head of art school in Estonia’s capital, Tallinn, during a time she described as “a very exciting period for Estonia — a belief that we needed young people to get out and do things. In two years I had worked so hard, but I became removed from teaching because of all of the administrative work, and my art making was also removed, to just a few hours on Sunday afternoons

When Peerna received a grant allowing her to go to Helsinki for five months on fellowship for study at the University of Art and Design there, she grabbed at it. It was there, in 1997, as an artist resident, that she met David Rothenberg, an American at the same institute on a Fulbright scholarship, and wound up making an even bigger jump — across the Atlantic to New York, to Cold Spring in fact, where he had already established his home.

“I came for a month, to test it out,” Peerna recalled, “and the village seemed like the right place to start. I loved the nature part; Europe is so densely populated that it seemed more like actual wilderness here, which I loved.” 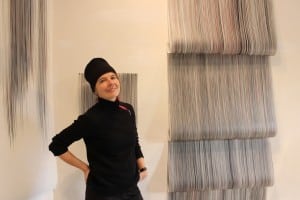 Jaanika Peerna, in front of one of her artworks, in her Nelsonville studio (Photo by A. Rooney)

During those first years in Cold Spring, Peerna gave birth to her son, Umru, and became involved in the local and regional art scene here.

Rothenberg’s professional life as a professor afforded them the opportunities to decamp to Europe for yearlong stretches during his once-every-seven-years sabbaticals, one of which took them back to Tallinn, another, quite recently, to Berlin. The year in Tallinn was important to Peerna “in making peace with living here, dealing with homesickness” and fulfilling “a mission to make sure my son knows the culture, speaks the language.” During her time on these shores, Peerna earned an MFA in intermedia design at SUNY New Paltz.

To create much of her work, Peerna takes five to 10 graphite and colored pencils and pushes them against the paper while she herself falls downwards. Sometimes she makes tornado-like movements of her arms to create circular works. “There’s something in the turbulence that I like, then the calming. Each line has a difference voice and frequency; you add them up and there is a pattern. There are connections between an element and multiplying. At a human level our own action and how it adds up to being something big. [The works are] not overtly political but consist of tiny actions that add up to big things.” Peerna often works in 36-inch squares, adding each together to create a new structure.

A description of Peerna’s work by Adrienne Conzelman of ARC Fine Art Gallery reveals the meshing of lines with nature: “An economy of line spontaneously, yet assuredly, echoes the swirling, energized forces of nature. The simplicity of black on white combined with an intense energy yields a rare profundity and beauty.” 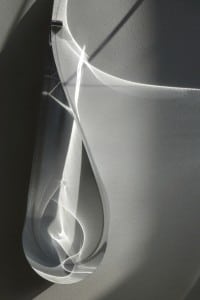 One of Jaanika Peerna’s artworks made of reflective film is attached to a wall. As the daylight changes, the artwork changes accordingly. (Image courtesy of the artist)

Peerna calls her art “fueled by forces of nature, transitions between quiet wind and storms, flooding: watching the water coming over the usual edges of rivers; force and powers and human tiny-ness.” This new show, in particular, found inspiration in the storms over the past few years, in “traveling in the Hudson Valley after seeing how much has been pushed away and what the impact of that has been.” A press release on her Storm Series describes it as follows: “The turbulence of nature is captured in her dark multiple layers of graphite lines, and the drawing seems to shift and pulsate while we look at the work.”

3 thoughts on “Jaanika Peerna: ‘There’s Something About Turbulence That I Like … Then the Calming’”