Opening Day for the Philipstown Little League 2015 season was idyllic, with blue skies, puffy white clouds and temperatures in the 70s as happy players, coaches, parents and fans gathered at the North Highlands baseball diamonds on Saturday, April 18. 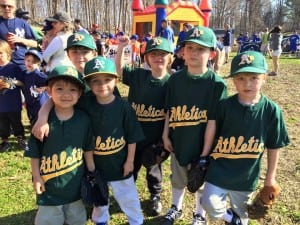 Teammates on the Athletics, which took on the Yankees

This year will see 139 players take the field. The major division features six teams including three from Fishkill — with both communities contributing 34 players ages 11 and 12. Four teams, whose lineups count 43 Philipstown players age 7 to 10, will compete in the minor division. The junior minors division is comprised of five teams — a total of 39 players ages 6 and 7. Fifteen girls ages 10 and older will compete in the softball majors. The softball minor division includes 15 girls — seven from Philipstown and eight from Fishkill. 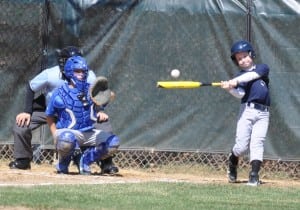 Teams in the major and minor divisions will play a 12-game schedule, culminating with playoffs on June 9 and championships on June 13. Teams will then be selected for the all-star travel season.

There was a heartfelt moment at this year’s Opening Day as Cold Spring resident Mike Santos was on hand to throw out the ceremonial first pitch. Santos and his family have been actively involved in Little League for many years. Tragically, his wife Helen was killed in an automobile accident last May, and he continues to recover from serious injuries he sustained that day. 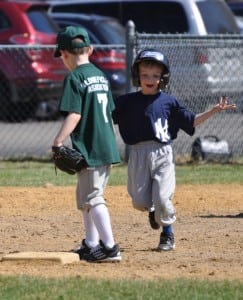 The joy of reaching base

This year marks a changing of the guard for the Philipstown Little League leadership as Dave McCarthy transitions in as president, taking over from long-serving Eddie Barry, who is stepping down. Other members of the executive include Tom Virgadamo, Russell Silverman, John Froats, Kristin Van Tassel, Doug Donaghy, Amber Stickle, Mark Forlow and Adam Hotaling. Virgadamo serves as vice president and also coaches Haldane’s varsity baseball team. Blue Devils’ players are helping out as assistant coaches with each Little League in 2015.

Photos below by Michael Turton