Beacon resident Anna Youatt didn’t think much about tick-borne illnesses until her 3-year-old son was bitten by a tick and contracted Lyme disease last year. It was then that she learned how much of an epidemic these illnesses are in the Hudson Valley and, distressingly, how little was being done about it. But she also discovered how many people in Beacon had also been personally affected by Lyme disease and were willing to take matters into their own hands.

“I wanted to get an action plan in place to do something about this at the local level,” she said. “We can’t wait years and years for change to happen while our kids grow up and keep getting bit.”

With that in mind, Youatt helped to found Tick Free Beacon, an advocacy group that seeks to educate the public about tick-borne illnesses while looking to develop practical solutions to reducing the local tick population. The group is currently working to develop tick traps that could cheaply and easily be made with readily available materials. 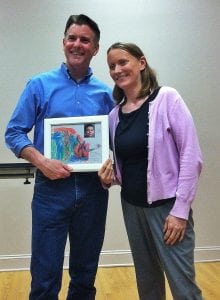 But the fields and wooded paths of the Hudson Valley are not the only battlegrounds in the fight against Lyme disease. The halls of government in Albany and the boardrooms of insurance companies nationwide are flash points that former State Sen. Terry Gipson knows all too well. At the invitation of Tick Free Beacon, Gipson spoke to a capacity crowd at Beacon’s Howland Public Library on May 12 about what citizens can do to enact change.

“There are a lot of things you can do about this issue that are not political and don’t involve government,” Gipson told the crowd. “But if we really want to make progress in preventing tick-borne illnesses and helping victims of these diseases, then we’re going to have to pass some laws at both the state and federal levels that don’t currently exist.”

Like Youatt, Gipson became interested in tick-borne illnesses after being affected personally. In 2012, while campaigning door-to-door for the state Senate, he was bitten by a tick and quickly came down with Lyme disease. Gipson described the experience as “the sickest I’ve ever been in my life.”

“I swore then that if I was elected I’d make Lyme disease and other tick-borne illnesses one of the top priorities of my office, and that’s what we did,” he said.

While in office, Gipson and his staff presented three bills related to tick-borne illnesses. The first offered greater protections for doctors treating Lyme disease using nontraditional methods or more aggressive antibiotic regimens, the second required insurance companies to cover the costs of treating tick-borne illnesses and the third bill sought to increase the amount of funding the state spent on research for tick-borne illnesses.

Only the first of these bills passed.

“We quickly discovered that the insurance companies are major players in both state and federal governments and that they’d like to spend as little money as possible treating people,” said Gipson. “They’ve done an enormously successful job lobbying elected officials and telling them that Lyme disease isn’t a real disease, or that Lyme disease is something we don’t know enough about, or that there’s too many dangers in treating it. As a result, it’s very difficult to move these issues forward.”

The news was discouraging to those assembled at the Howland Library, many of whom were quite familiar with how difficult it can be to receive treatment for Lyme disease. Several attendees shared stories of being laughed out of doctor’s offices, misdiagnosed, and — for the lucky ones who received proper treatment — forced to pay tens of thousands of dollars in out-of-pocket costs.

Still, Gipson noted that it took an up-swell of community support to assist in getting the medical protection bill passed, and the same could still be done with the remaining bills. Beacon Mayor Randy Casale, who was in attendance with several members of the Beacon City Council, offered to organize local mayors to lobby the state. Tick Free Beacon co-founder Taryn Davis noted that Virginia had recently passed a bill requiring doctors to inform anyone who is tested for Lyme disease that the test is only effective half the time, and suggested that a similar bill could be passed here.

Beacon resident Audrey Molsky, Gipson’s former deputy chief of staff, told the group that they should avoid easy solutions like Internet petitions and other means of contacting the state government that requires little effort. As the person in Gipson’s office who dealt with the bulk of citizen comments regarding these issues, she found that consistent, respectful, personal appeals were the most effective way of standing out from the hundreds of requests that elected officials receive every day.

“The amount of effort you put into it equals the amount of response you get in return,” she said.

Ironically, the best person to contact in Albany may be the very person who defeated Gipson in an election last fall. Republican Sue Serino of Hyde Park, who currently holds the seat in the state Senate that was previously occupied by Gipson, was recently named the chair of the Senate’s Task Force on Lyme and Tick Borne Diseases. Serino has said that her son battled Lyme disease in the past.

In the meantime, one of the most pressing tasks for those concerned with making sure that the issue of tick-borne illnesses receives adequate legal attention will be figuring out why these diseases remain severely under-reported. Members of Tick Free Beacon contacted the Dutchess County Department of Public Health to find out how many local cases there were of Lyme disease. Just hours before the meeting, Youatt received a call from the county with the statistics. The number she was told shocked her.

“They said only five people in Beacon got Lyme disease last year,” announced Youatt at the meeting to audible gasps of disbelief. “I mean, I know five people just on my street who got Lyme last year.”