Wylie McDonald is the Haldane High School salutatorian for 2015. In the fall, he will be attending the Rochester Institute of Technology (RIT) in Rochester, New York. He plans to pursue at least a master’s degree there in mechanical engineering. After college he hopes to work directly in the engineering field or would also be interested in the corporate world in general, not necessarily in an engineering capacity. He stated, “A mechanical engineering degree qualifies one for a broad range of professions beyond the engineering sphere, and this wide applicability was one of my primary motivators in choosing this major.”

Wylie has received numerous awards, including the Bausch and Lomb Honorary Science Award, the Air Force Math and Science Award and the Air Force Technology Education Award. He was a National Merit Commended Scholar, an AP scholar with honor and a member of the Haldane Academic Hall of Fame, was on the principal’s list for all quarters of his high school career and was a member of the National Honor Society.

He earned highest average awards for English 9, Global History 9, Introduction to Calculus, AP English and Composition and the Student of Excellence award for French IV. Wylie also received awards for Outstanding Achievement as Theatre Tech in Sound, Most Aspiring Behind the Scenes in Drama and the Haldane Drama Award for Excellent Achievement in Sound. 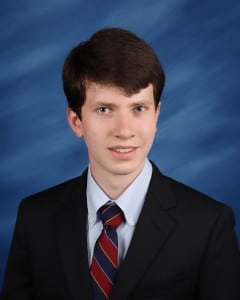 Wylie was a trombonist in both the concert and jazz bands. He was a founding member of the Science Club and treasurer of the Environmental Club. He held several offices on Student Council. He was a member of the 2014 Northeast regional champions Building Bridges, Building Boats rowing team. Sports-wise his interests include skiing, kayaking and hiking. He was a sound designer/engineer for the Haldane Drama technical crew.

He took advantage of several RIT programs, including RoboCamp, the Photojournalism Workshop and Medical Science 1: Solving Crimes Using DNA. He has been a member of the Science Research program at Haldane since its inception in 2012. In fifth grade Wylie was a member of the Destination Imagination (DI) team that won the world championship for middle school at the global competition in Knoxville, Tennessee.

He volunteered his time to the Haldane Central School District as audio/visual and technical crew for PTA, school district and nonprofit events. He was a maintenance volunteer for boat building and reconditioning boats for Building Bridges, Building Boats and also volunteered his time on the waterfront crew for the Clearwater Festival and as a STEM/Eco Night presenter. Wylie worked as an intern for the Cold Spring Film Society, helping set up projection and sound systems.

He was a production assistant for Cold Spring Sound, where he set up sound reinforcement and equipment for concerts and festivals. He also worked as a logistics coordinator/ground crew for Building Bridges, Building Boats, with responsibilities including equipment transportation and meal planning and preparation.

Wylie enjoyed his time at Haldane. He states: “At Haldane, I’ve been fortunate enough to have been able to interact with an amazingly talented and caring group of friends and mentors who have shaped me in innumerable ways, and for this I am eternally grateful. Whether it is a sporting event, a fundraiser or a dramatic performance, the entire Haldane community rallies behind the cause. The passion and involvement of the school community is simply incredible here, and it makes Haldane a truly special place. The teachers here don’t just know your name. They take a genuine interest in your success and have a passion for helping students achieve this success that is evident each and every day.”