Just after 7 a.m. on Tuesday, June 16, North Highlands Volunteer Fire Department responded to a structure fire on JoAnn Place, just west of Perks Boulevard. Firefighters extinguished a blaze in an upstairs bedroom at the home of William and Mary Flaherty. The couple escaped without injury. 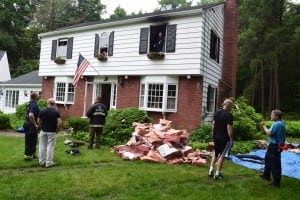 The scene after the fire was extinguished.

The cause of the fire was unknown although first responders on the scene speculated that an electrical problem was to blame. Other fire companies that answered the call included Cold Spring, Garrison, East Fishkill and Rombout. The Flaherty’s son Bob, a member of the Town of Philipstown Town Board, discovered the fire as he walked past his parents’ home that morning.