Lucille Tortora takes photographs, deconstructs and reconstructs them, carefully considering how to connect and set them in the photo-collages she makes by combining three or four separate images. Tortora, whose solo exhibition Reflections runs at Cold Spring’s Buster Levi Gallery through Sept. 27, came to photography after years spent studying and working in other creative forms: fashion design, art history.

But, “the minute I started in photography — I knew,” and she’s been toting her Hasselblad camera around the world ever since, decades now, shooting thousands of square images, often of architectural details and textures, and developing them herself, using contact sheets to determine her choices. This exhibit gathers together 10 gelatin silver print collages, all featuring images taken while traveling in Asia and Europe from 1992 to 2005. 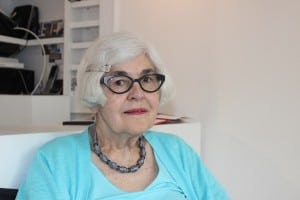 Lucille Tortora  (Photo by A. Rooney)

In an artist statement relating to the exhibit, Tortora quoted Julia Margaret Cameron: “I longed to arrest all beauty that came before me, and at length the longing has been satisfied.”

Tortora then noted that she “sees” the beauty in all views around her: “Words have always been difficult; seeing has always been easy, but until I found photography images flew through my mind never caught … beauty is a very fragile ingredient in life, fleeing quickly. To be able to capture one moment is a treasure.”

Initially deciding on a career in fashion design, Tortora went to the Fashion Institute of Technology and became a children’s wear designer. After a break staying home raising her children, she returned to school, at Hofstra, this time intending to study art and art history and planning on becoming a curator, but she was foiled by her inability to master foreign languages. “I think visually,” she noted.

She attempted to work for her husband, an engineer in the heating and air conditioning field — “that didn’t work out,” she said wryly. “Let’s just say we excelled in different things.” Tortora then got into photography “on a fluke. I decided to go back to school again, this time thinking of going into advertising, because I preferred working on the flat, not design work,” she explained.

Attending a conference in Aspen, she was asked where her camera was and became quickly aware that photography was becoming an integral part of advertising. Told she should take a class, she enrolled in a basic course at a local community college. The class encompassed both technical shooting and darkroom skills, and Tortora was hooked.

“The beauty of working in a darkroom is that you’re a human being, and you don’t come up with the same exact colors or tones every time,” she said. Working under a “wonderful mentor,” noted photojournalist Arthur Leipzig (who told her, “I don’t have to teach you anything about taking a photograph, but boy do you need help technically”), Tortora wound up getting a master’s degree in photography from Long Island University.

Tortora’s husband was pleased by it all. “Because of his engineering side, he was so excited that he built me a darkroom, thinking I’d forget about it, like I did with the other things I had done, and he’d get it! It didn’t work out that way.”

In the years that followed, Tortora served as staff photographer, then curator of photography, at the Fine Arts Museum of Long Island in Hempstead, all the while pursuing her own photography. She then opened up a gallery in Bellport, where she showed the work of other artists, all photographers, but found that people on Long Island preferred to head into New York City to purchase art. She and her husband relocated to the Hudson Valley to be closer to one of her daughters, Suzi Tortora, who was by then bringing up her own son in Philipstown.

Tortora has never crossed over into digital. She originally worked with a 35mm camera but quickly shifted to her Hasselblad — “an incredible camera. You look down into it; it has a hood. I do all my photography without a tripod — I’m the tripod, standing perfectly still,” Tortora enthused. She makes maquettes (small models) from contact sheets; the Hasselblad’s rolls contain 12 images each. “I made a special kind of a holder, [on which] I can fit the 12 negatives … I cut them up and think about them [combining them in the collages]. I then make quick, inexpensive prints the size I’m going to print them to see if I like them.” 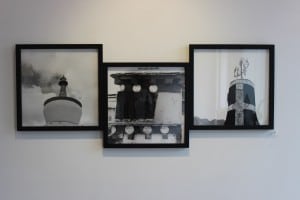 Photographs by Lucille Tortora, on exhibit at Buster Levi Gallery
(Photo by A. Rooney)

The images in Reflections were shot in Spain, Germany, China and Tibet, largely on trips Tortora has made over the years with a photographers’ group she has belonged to for many years. The group meets about once a month to discuss work and goes on trips, with photography as the focus. Although the trips and the photographing took place a while ago, all of the artworks on display are new, as Tortora re-examined her many contact sheets to find images she had never printed before and wound up having a very busy couple of months in the darkroom assembling these. “This show represents my love for architecture,” she said.

Although the exhibition entailed a lot of work done at a rapid clip, that’s OK by Tortora, who said, “I feel very grateful as a person to have had a wonderful family and to find an art form that I still love.” And, as her statement concluded, “I see this capturing as a never-ending process that fills my need to communicate with others.”

Tortora’s work has been featured in solo exhibitions and group shows throughout the country. Her photographs are included in several museum collections and in private and corporate collections. Full details can be found on her website, lucilletortora.com.

The Buster Levi Gallery is located at 121 Main St. in Cold Spring. Gallery hours are Friday to Sunday, noon to 6 p.m., or by appointment. For more information, visit busterlevigallery.com or phone 845-809-5810.