By the time you read this, if all has gone according to plan, we will have moved our office in Cold Spring from 69 to 161 Main Street. We’ll be located on the same side of the street in part of the building that houses the Once Upon a Time antique store. Other new neighbors will include Joseph’s Fine Jewelry, Cold Spring Pet Supply and, next door, Groombridge Games (looking forward to understanding what goes on in there).

The key reason for moving is to use a smaller space for less rent to make the dollars we raise from supporters go further toward our mission: continuing to publish a quality weekly newspaper and daily website. Thanks to the leadership of our board of directors, our mission is very much alive and kicking. 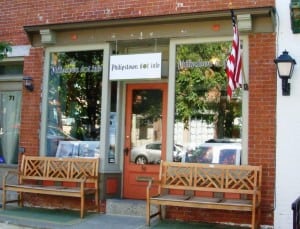 We occupied 69 Main for more than five years. It was rented by our founder Gordon Stewart as the headquarters for his then-upstart Philipstown.info, which launched on July 4, 2010. But Gordon always had more in mind for the space. He saw it as a home for cultural events that would bring people together to share and celebrate many forms of expression.

In this pursuit, as in the creation of the website and later the print paper, Gordon was ambitious, generous, inclusive and occasionally aggravating—especially if you were trying to get work done in the office on deadline. More than once we looked up to find artists carrying in sculptures and paintings or musicians lugging speakers and guitars, sheepishly declaring Gordon said they could set up for the show we knew nothing about.

With a brick wall as backdrop and a revolving cast of thousands, Gordon launched a songwriting series, classical music recitals, a summer jazz program, poetry and play readings, candidate debates, photo exhibits and video installations. Dare I mention Cold Spring Radio broadcasting live on Saturday mornings as we stepped gingerly past the microphones and we whispered in the back room over some fine point of journalistic inquiry?

Gordon reveled in the tumult and waved off obstacles to the next great ventures, which no doubt are recalled fondly by organizers and participants alike. I hope they will share memories and thoughts online. 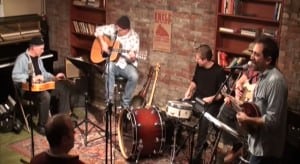 I recall attending an early Ken Veltz-hosted songwriters showcase with my wife and getting beguiled by a duo called Open Book. We purchased Michele and Rick Gedney’s CD and wondered what else was going on at this funky storefront. Turned out it was a vortex with a mighty pull. Later, finding Rick and Michele as friends and colleagues was one of a string of fortunate relationships bound together by a commitment to meaningful work.

More than a few times Gordon expressed disappointment that we didn’t replicate his film-inspired conception of a newsroom (e.g., The Front Page or All the President’s Men) with phones ringing, typewriters clacking and reporters and editors engaging in witty and biting repartee. In the digital age our work is quieter and more studious, although we groaned loudly when he started playing the piano searching for the proper melodic structure of a Mozart piece as we struggled to proofread and write headlines.

A physical space that has meaning is even more important in an age when so much of our lives seems encased in “the cloud”—a breezy euphemism for thousands of acres of electricity burning server farms collecting and storing our clicks.

We never looked beyond Main Street for a new home because we want to be seen not just online but directly by the people in the community we seek to serve. We hope to expand our presence in Beacon as well. We cover stories in Beacon because our two communities are increasingly intermingled, especially as policy makers introduce pathways such as a trolley connection and the Fjord Trail.

Stop by and visit with us in the days ahead.

2 thoughts on “We Have Moved”