While the Haldane Parent-Teacher Association has long organized after-school educational activities for elementary and middle-school students, the consensus has been that those in high school are too busy and/or jaded to participate. At the same time, parents often hear the refrain, “This town is boring — there’s nothing to do!”

This year the PTA, at the behest of Principal Brian Alm, is testing and partly funding workshops during lunch and the free period that ends the school day. The topics, suggested by students, are mindfulness and stress-relief techniques, cooking, cartooning, filmmaking, fencing and make-up artistry.

“Enrichment programs are a good avenue for allowing kids to try new things,” explained PTA President Julisa Rincon-Tomizawa. In high school, “many kids are marginalized, especially if they’re not into sports or drama, but they have talents that are not tapped into in class or outside of class on a regular basis. We want to help them develop other interests.” 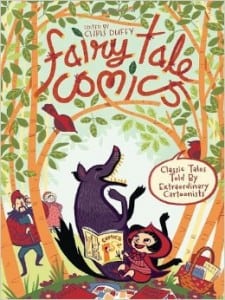 A new anthology edited by Chris Duffy, who will be teaching the PTA cartooning series at Haldane.

The workshops are taught by community members, some of whom are parents of Haldane students. “We looked for people who were available, flexible and had experience working with this age group,” Rincon-Tomizawa said. “Luckily, we had a talented bunch.”

Former PTA Vice President Lourdes Laifer, who represents the high school level, helped develop the program. She calls it “an incubator for classes that could become ongoing” and said a particular aim is “getting at those kids who are falling through the cracks.” Because the classes only last a short period of time, students can “try something out of their comfort zone” without a huge commitment. “We know the teenage brain drifts toward risk-taking,” she said. “This is a small, safe risk.”

The first workshop is a six-session series called Body and Brain that begins during the lunch period on Oct. 14. Three instructors will each present two sessions focused on techniques designed to control stress. Laura Danilov will guide the group in stress-release tools, Maeve Eng-Wong will talk about the benefits of meditation and Liz Keifer will discuss achieving intense focus, or being “in the zone.”

“I love working with high school students because they have the concentration and willingness to open themselves up to the tools that allow them to move forward in life,” said Keifer, who has two children at Haldane High School. “They are craving the knowledge.” At the same time, they face intense pressures, such as those related to attending college.

The other workshops begin the week of Oct. 26. For the cooking series, Evelyn Garcia, a graduate of the Culinary Institute of America, will teach three classes on what she calls “college dining survival skills 101,” including basic culinary techniques and shopping tips. She hopes the students learn to “save time, money and stay healthy by cooking balanced meals themselves.”

Chris Duffy, the former senior comics editor at Nickelodeon Magazine, will be the cartooning instructor. Duffy has taught younger students but said he is eager to get to work with teenagers because “I think high school kids are interested in going deep into a subject.”

Peter Sanders, a documentary filmmaker, will teach the basics of how to shoot, edit and storyboard a short film. “Filmmaking takes creativity and a command of technical skills,” he said. “When you put a film together, you are not only telling a story but also digging into your own arsenal of emotions. Being a filmmaker is wonderful because it encourages you to see the world as a source of constant discovery.”

Cassandra Saulter will teach Makeup as Art, presenting make-up as a creative science and career, while instructors from the Peekskill Fencing Center will offer a six-week session on footwork, attacking, defense and strategy.

The mindfulness series and each of the three-week sessions are $30 each. The fencing workshop is $60, which includes the use of the center’s protective gear. To register, or for information about scholarships, visit haldanepta.org.