In a community that, by any standard, is well off, some families still worry about their next meal. As many as 50 families rely on the Philipstown Food Pantry, a project of the First Presbyterian Church of Philipstown in Cold Spring founded more than 30 years ago, to help put food on the table.

The pantry has been successful for so long because the community has consistently rallied behind it, including Girl Scouts and students, Foodtown and other businesses and organizations such as the Philipstown Farm Market and the Garrison Fish and Game Club, members of other local churches and the many residents who have given time, money and food.

This year Glynwood, the non-profit farm on Route 301 east of Cold Spring, has partnered with the food pantry to supply fresh produce. Jarret Nelson, who manages vegetable production at the farm and coordinates its CSA, said that Glynwood has since early June been supplying the pantry with 10 half shares at a greatly discounted rate. On alternate weeks, participants receive a bag of fresh produce.

“Shares include about 10 items,” which fill the bag, Nelson said. “This time of year it’s potatoes, sweet potatoes, carrots, Swiss chard, garlic, spinach, lettuce, cilantro and fennel.” Glynwood also delivers produce that is offered to other pantry clients; by the end of the growing season, Nelson expects to have donated as much as $3,000 worth. The contributions will include a delivery of root crops just prior to Thanksgiving. (Individuals are welcome to donate fruits and vegetables from their own gardens.)

Andy Reid, an elder at First Presbyterian, coordinates the volunteers who deliver the produce. “There are about seven of us [who take turns] doing the veggie run,” Reid explained. Pickup at Glynwood is 7:30 a.m. on Saturday morning, but the early hour has not discouraged anyone. “So many people want to help,” he said. 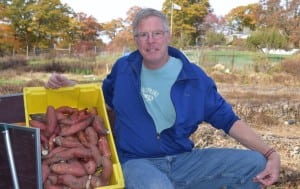 Andy Reid, one of the volunteers for brings produce from Glynwood Farm to the Philipstown Food Pantry each week (Photo by M. Turton)

Reid sees parlaying that high level of interest into helping others as the next challenge. “Who is underserved in the community?” he asked. “I think it’s the seniors.” Reid hopes that in the future the partnership with Glynwood can be expanded to benefit seniors living at Chestnut Ridge.

For Andrea Bach, the pantry’s volunteer coordinator, Thanksgiving always brings the organization’s needs into focus. “As the holiday season approaches, we worry if we’ll be able to supply all our clients with an enjoyable feast,” she said. Bach aspires to have that meal include “a turkey and all the trimmings” for each family, distributed this year on Nov. 21, the Saturday prior to the holiday.

While some residents donate frozen turkeys, Bach said there’s a simpler way to help that also aids the pantry’s holiday preparations. “If you’ve earned a free turkey coupon at Foodtown and don’t need it you can leave it with [the] head cashier and we’ll collect them,” she said. “That’s great for the pantry because our cold storage is very limited.”

While the national economy continues to slowly improve, Bach said the pantry’s needs have not declined. “We see more seniors than in the past,” she said. Social Security payments are adjusted each year based on inflation but that only amounted to a 1.7 percent increase in 2015 and there will be no increase in 2016. Benefits from the Supplemental Nutrition Assistance Program (SNAP), formerly known as the Food Stamp Program, also have been cut. 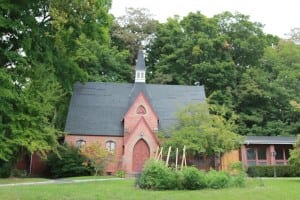 First Presbyterian Church of Philipstown. The pantry entrance is at left. (file photo)

Nationally, a survey of food banks last year by Feeding America found that a fifth of the clients’ households include a former or current member of the Armed Forces, four in 10 included a child, and the median household annual income was $9,175. About four in 10 respondents said they “water down food and drinks to make them last longer,” and almost two-thirds said they rely on food charities. Further, Feeding America estimates that about 20 percent of the households that are eligible for SNAP have not applied.

The best way to help

In the end, a cash donation is the most effective way to support the food pantry. Financial contributions, which can be mailed to Philipstown Food Pantry, 10 Academy St., Cold Spring, NY 10516, are used to purchase food and other products from the Hudson Valley Food Bank in Cornwall for 16 cents per pound, far less than groceries purchased by residents and donated.

“Many groups and organizations have special fund raisers and collections to support us that way,” Bach said. Volunteers are also invited to staff the pantry or pick up groceries from Hudson Valley Food Bank and elsewhere.

One thought on “Food Pantry Preps for Thanksgiving”