Josh DiNardo will remove his chief’s hat, emblematic of his position as the lead firefighter with the Cold Spring Fire Company (CSFC), at the end of the year. It’s a hat he’s worn since January 2014, in a role that required him to take charge of responses to a variety of serious incidents, from structure fires and traffic accidents to drownings and trail rescues. DiNardo was a key player on Nov. 30, 2014, helping to lead the dramatic rescue of a local teenager who had become stranded on a narrow, rocky ledge in an abandoned quarry just outside Cold Spring.

Rescuing lost, injured or stranded hikers has taken on a higher profile of late due to a pronounced increase in the popularity of area trails. A roundtable discussion on Dec. 2 among the agencies involved looked at possible improvements in how agencies, including local fire companies, respond to trail users who find themselves in trouble. 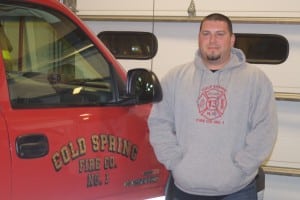 Most incidents take place on lands owned by New York State, particularly at Breakneck Ridge in the Hudson Highlands State Park, considered one of the most popular day hikes in the country. While the meeting concluded that improvements could be made in such areas as communications, data gathering and funding, DiNardo has seen progress in recent months in one key area that directly affects CSFC.

In an interview with The Paper, DiNardo said that in the past, the number of calls to CFSC to assist lost or injured hikers was “ridiculous.” In 2013, Cold Spring’s firefighters responded to as many as 30 calls. Now, DiNardo said, The New York State parks department (in the Office of Parks, Recreation and Historic Preservation), handles almost all calls from lost hikers.

“We haven’t been called out at night for lost hikers in a long time,” he said. “The guys at Parks are doing a really good job.” Calls to CSFC in 2015 have almost exclusively dealt with injuries. “If we get a call to help someone who is injured,” DiNardo said, “we have to go. It just has to be done.”

Still, DiNardo sees room for improvement. One change he supports is an increase in the number of trail stewards assigned by New York State Parks at popular trailheads. Currently, he said, three stewards are on duty during peak periods. “They’ve done an excellent job of helping people down from trails,” including Breakneck, he said, while also clarifying routes for hikers and providing practical advice before they set out on their treks.

Joe Hyatt, chief of the North Highlands Engine Co. 1, also known as the North Highlands Fire Department (NHFC), told The Paper that when the Cold Spring Fire Company gets a call about a hiker, North Highlands firefighters are usually called to their fire hall on Fishkill Road. In some cases they are then dispatched, but more often remain on standby in case CSFC receives a second call while assisting a hiker. Hyatt said that in the past year, NHFC also took the lead in about half a dozen hiker calls. 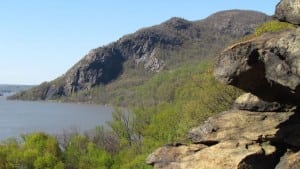 A view of Breakneck Ridge from the cliffs at Little Stony Point (file photo by M. Turton)

Hyatt said he’d like to see vehicular access to trails improved. In the past, he said fire companies could drive the old Cornish Estate road from Route 9D all the way to Surprise Lake Camp. He said regaining access to such abandoned roads, an issue raised at the Dec. 2 roundtable, would improve the efficiency of hiker rescues considerably.

Hyatt agrees that funding is also an issue and feels permits would help. “I have to buy a permit to hunt or fish,” he noted. “Hikers should be required to buy a permit as well.” He said funds raised through permits could be used to fund improved hiker rescue efforts.

Ankle and knee injuries most common

The most common hiker injuries are to ankles and knees, DiNardo said, along with some back and neck injuries. The seasons often play a role. “In early spring, frost can make rocks slippery,” he said, and in the fall, fallen leaves obscure rocks along trails, creating a similar hazard. “In summer, heatstroke can be a problem,” he said.

DiNardo said Breakneck is where hikers have been injured most frequently, but that in the past year firefighters were called almost as often to the Cornish Estate Trail located between Little Stony Point and Breakneck. Thus far in 2015, CSFC has taken the lead on 17 hiker calls, 15 of which involved injuries, and provided mutual aid to the North Highlands and Garrison Volunteer Fire Companies on another four calls.

Of the 17 calls in which CSFC was the primary responder, 10 were to Breakneck and seven to the Cornish Trail. The average call took an hour and 45 minutes to complete (ranging from 15 minutes to four hours) and involved 10 firefighters. Nine of the 17 calls involved ankle or knee injuries, three were back injuries, two were lost hikers, one a possible broken arm, one a suspected spider bite and one a sick hiker.

Baisley named Firefighter of the Year

Dawn Baisley has been named the Cold Spring Fire Company’s 2015 Firefighter of the Year. At its Dec. 1 meeting, CSFC also elected its officers for 2016: