As the year winds down, so too do hunting opportunities in Putnam County. By the end of December, the most popular hunting seasons, including those for deer, bear, ducks and Canada geese, will have ended. The sport remains popular, but participation is declining overall.

Deer is easily the most popular species hunted, both locally and across New York state. The state Department of Environmental Conservation (DEC) reports that 238,672 deer were taken statewide in 2014. The agency combines southern Dutchess County and Putnam County as one management unit; within that area, 785 deer were harvested, including 156 in Philipstown.

With only a few days left in the season, the deer hunt will likely be smaller in 2015. “This year does not seem to have been as successful” for deer hunters in Putnam, said DEC Conservation Officer Peter Jackson. “A lot of hunters have reported seeing fewer deer this year.” John Stowell, an avid hunter and program director at the Taconic Outdoor Education Center (TOEC), said hunters have made the same observation to him.

There is a black bear population in Putnam County, but successfully hunting them is rare. Jackson said that he has not heard of any bears being taken this year. DEC statistics indicate no bears were taken in the county in 2014. In 2013, one bear was taken in Putnam County, in Southeast.

What might be surprising to non-hunters is the number of hunting opportunities in winter and early spring, as well as some of the species that can be hunted. Hunting seasons that end at various times between mid-February and late April are ongoing for coyote, bobcat, fox, raccoon, opossum, snow geese, bobwhite quail, pheasant, ruffed grouse, cottontail rabbit, snowshoe hare, squirrel and weasel. The diamondback terrapin and common crow can also be hunted. Skunks may lead the “surprise” list. 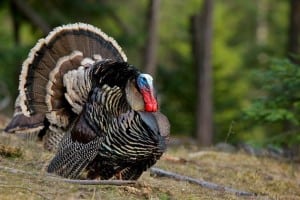 Wild turkey is one of the more popular species hunted in Putnam County. (Photo courtesy of Taconic Outdoor Education Center)

Wild turkey, a very popular species among local sportsmen, can be hunted during a short two-day season in April and a second, month-long period in May. Snakes, lizards and salamanders can never be hunted but frogs, toads and snapping turtles can be harvested in the summer months.

A skirmish indicative of changing demographics

In early November, a Brewster resident proposed to a committee of the Putnam County Legislature that hunting be banned countywide. He raised the issue after hearing gunshots from hunters whom he felt were too close to his home. (Regulations prohibit hunting within 500 yards of buildings and roads.) His idea not only generated no support, it brought dozens of county residents out to the committee meeting in support of hunting. The notion of a ban went no further.

The brief, one-sided skirmish hinted at not only the tension that sometimes exists between hunters and  non-hunters but also changes in attitude and levels of participation in the sport. While hunting remains popular in many rural areas, the number of hunters has not increased nationwide. According to the federal Fish and Wildlife Service, while 13.7 million people hunted in the U.S. in 2011, overall participation has been declining since 1980.

Urbanization undoubtedly accounts for part of that shift. In areas such as Putnam County, hunting was a tradition commonly passed down from generation to generation, but the demographics have changed. For city dwellers moving to the area in search of a more rural lifestyle, hunting has seldom been a big part of their family tradition.

In a 2012 report, the Forest Service noted that wildlife or bird-watching and photography have become more popular as hunting declines. A survey by the service estimated that 823,000 people hunted in New York state in 2011, contributing $1.5 billion to the economy. But it also showed that 4.2 million people participated in wildlife viewing and spent $4.1 billion in the process.

Hunting as a lifelong pleasure

John Stowell at TOEC, who has hunted deer and wild turkey and “ruffed grouse, squirrel and especially cottontails with our family beagles as a youngster,” says it’s clear that far fewer young people are hunting but sees it as part of larger trend. “Fewer young people are engaged in the natural world in general, let alone in the hunting community,” he said. “Young hunting enthusiasts really depend on the family tradition of hunting or the expertise of experienced hunters to show them the way.”

He added that hunting is part of the message to students who participate in education programs at TOEC. “The educators here do an excellent job of presenting hunting as a wildlife management tool.”

Hunting remains a passion and pleasure for Stowell, as it does for many other Putnam and Dutchess county residents. “It is a time to sit quietly in nature for hours observing what few will ever see,” he said. “I have seen bobcat, coyote, black bear, fisher and multiple species birds. None of these do I ever intend to kill. I have had owls perch within feet of me and black-capped chickadees rest on my gun barrel.”

Details regarding hunting regulations, species and seasons in Putnam and Dutchess counties and the state can be found at www.dec.ny.gov. An annual hunting license is required for anyone aged 12 and older and new hunters are required to take a safety course or courses, most of which are taught between March and September.

One thought on “Major Hunting Seasons Coming to a Close”