Eight boys and girls were named local champions of the 2016 Knights of Columbus Free Throw Championship and have earned the right to compete at the district level on Feb. 12 at St. Columba School Gym in Hopewell Junction. Loretto Council No. 536 sponsored the competition on Jan. 14 at the Capuchin Youth and Family Ministries. 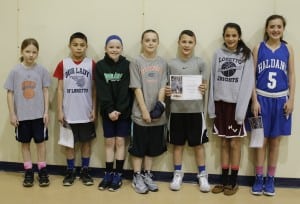 In the 10-year-old bracket, Mairead O’Hara was the top girl with six and Ryan Eng-Wong won among the boys with 13. In the 11-year-old bracket, Thomas Tucker won with five and Madison Chiera had six. Dillon Kelly won the 12-year-old boys’ bracket with nine. Gaetano Cervone was the 13-year-old boys’ champion, with four. In the 13-year old girl’s bracket, twin sisters Isabela and Olivia Monteleone each made 10 in the first round. In the tie breaker, they each made two of five shots. In the second tie-breaker, each had made their first four shots before Olivia missed. That put the pressure on Isabela, who made her final shot for the win.

All 26 students who participated received a certificate. The local champions will each receive an engraved trophy.