Sheriff commends both for preventing a suicide

In a ceremony on Feb. 16, Putnam County Sheriff Donald B. Smith commended Deputy Sheriff Daniel Hunsberger and Sgt. Timothy Keith for their actions in preventing a suicide last November in Southeast. The officers responded to a call to check on the welfare of a 53-year-old man and came upon him standing on a ladder next to his garage with a noose around his neck.

When the man jumped off the ladder, the officers scrambled up the ladder and supported his weight, even as he attempted to push them away. The officers pulled on and broke the roof support that was holding the noose, and all three men fell to the ground. The officers administered first aid to the victim, who was transported to Danbury Hospital. Hunsberger and Keith were treated for their injuries at Putnam Hospital Center. 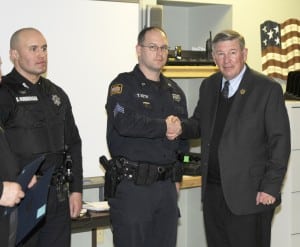 At the ceremony, Smith paid tribute to Keith and Hunsberger for what he called “their selfless and valiant acts of valor, performed in spite of peril to themselves, which prevented a tragic death.” Because of their actions, he said, “another human being has been given a second chance at life, and for that we are all very grateful and proud.”