About four years ago, Kat Stoutenborough, who runs her design company, Reklaimed, out of her home in Beacon, was feeling isolated. “I was spending a lot of my creative time alone and so were many other people I knew,” she says. “We needed to connect and support each other.”

To bring together other artists and designers, she launched a group called CoMFY, which stands for Creative, Mamas, Friends and Yahoos. It took root in Beacon’s coffeehouses, then at its homes, galleries and studios. Meeting weekly, CoMFY began with about 20 stalwarts and has since grown (counted through its Facebook page) to more than 90.

To celebrate the creative efforts of the informal collective, the Howland Public Library has mounted an exhibition, for the second year in a row, called CoMFY 16 featuring works by 24 of its members. After an opening reception from 5 to 7 p.m. on Beacon’s Second Saturday, March 12, it will be on view through April 2. 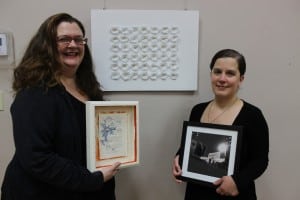 Kat Stoutenborough and Michelle Rivas, director of the exhibit space at the Howland Public Library, holding their works featured in the CoMFY exhibit (photo by A. Rooney)

Although larger CoMFY meetings are now arranged on an ad hoc basis, there is a steady group of women — not all whom are creatives, mamas, friends or yahoos — who meet regularly. The group skews toward the visual arts but also includes writers, actors, non-parents and a host of other occupations and categorizations. CoMFY began, Stoutenborough recalls, with a “hard and fast rule — which, of course, we broke — no talk about spouses or kids. You had to talk about art — making it, selling it, inspiration for it, technical sides of it, problem solving, coping with periods of withdrawal from it, losing the will to create and sharing that it’s okay to lie fallow. The ebb and flow of it all. From ‘What glue do you use?’ to giving feedback on works in progress.”

Stoutenborough says that for her, the group provides a place to “bounce ideas off each other, help solve problems and support each other as we branch out into new work.” CoMFY also organizes workshops, often on topics which make artists shudder, such as bookkeeping and tax strategies, self-promotion and even motivation. “After all,” says Stoutenborough, “no one thinks of artists this way, but we’re small businesses. And there can be a lot of ‘Oh my God — sales taxes. Yearly or quarterly — help, I have no idea’ moments. We need each other to lead us through the dark.” 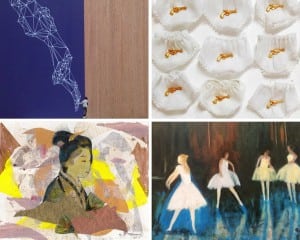 For Stoutenborough, a Michigan native who moved from Brooklyn 10 years ago with her husband, Dan Rigney, and their infant daughter in search of “a place where my daughter could learn to ride a bike, in a park,” CoMFY is near and dear to her heart. In addition to her design work (she creates handstitching on book pages, highlighting linked words with finely-designed thread streams that almost form poetry related to the text), she also makes objects out of recycled felted sweaters (“I broke a washing machine,” she says with chagrin).

Stoutenborough also updates the Beacon Arts website at beaconarts.org and produces pop-up shops in Beacon focused on Hudson Valley arts, crafts and homemade goods. The most recent was Cherrybomb, which took over Zora Dora on Main Street during the holidays last year.

The Howland Public Library is located at 313 Main St. The exhibit may be closed at times due to other library events; check the calendar at beaconlibrary.org.