Screening and Q&A set for April 2 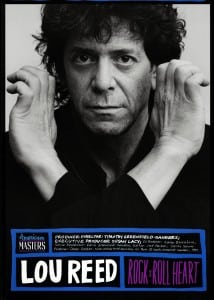 The poster for Lou Reed: Rock and Roll Heart

The filmmaker Timothy Greenfield-Sanders will screen his 1998 documentary, Lou Reed: Rock and Roll Heart and answer questions at the Tompkins Corners Cultural Center in Putnam Valley at 7:30 p.m. on Saturday, April 2.

The documentary, which won a Grammy for Best Long Form Music Video, premiered at the Sundance Film Festival and later aired on PBS as part of the network’s American Masters series.

Tompkins Corners Cultural Center is located at 729 Peekskill Hollow Road. Tickets are $10 ($7 for students and seniors) and may be purchased at brownpapertickets.com or leave a message at 845-528-7280 to reserve seats and pay at the door. The screening will be the first of five events at Tompkins Corners funded by the ArtsLink grant program of the Putnam Arts Council, which is supported by New York State Council on the Arts.

One thought on “Lou Reed Doc to Play Putnam Valley”