Not long ago, Bannerman Island was virtually inaccessible to all but the people working on shoring up what remained of the historic site redolent of its Native American, Dutch and Revolutionary War past. Located in the Hudson between Cold Spring and Beacon, the craggy island, with its visually striking ruins (remnants of a past owner’s Scottish heritage) has always inspired curiosity — so much so that when the property opened to the public for “hard hat tours,” they frequently sold out, as do the current line-up of cruises and kayaking expeditions which venture to and around the island from May through October.

As the island’s gardens have been reclaimed by volunteers, the arts have gained prominence on the island. Over the past couple of years numerous performances have attracted concert- and theater-goers who savor the setting, with the chairs situated in a grove looking out to the romantically ruined tower that still dominates that part of the Hudson.

This year’s schedule is expansive, with performances from the Hudson Valley Shakespeare Company, Just Off Broadway, lots of bands, storytellers, the continuation of Melissa McGill’s public art project Constellation and a number of food events. There are also cruise tours aboard The Estuary Steward and kayak expeditions with multiple departure points.

To herald the season, a special fundraising brunch, “Bannerman Island Voices — Whispers From the Castle Keep,” will be held at noon on Saturday, April 23 at The Falcon in Marlboro. Along with music from Sheila Dee and the Dazzlers and a silent auction, the event will feature a multimedia presentation using interviews from Bannerman family members and employees who lived and worked on the island. Some material recounts and refutes many of the legends about the place.

Original songs are included, as are projected historic images. The presentation was conceived by Neil Caplan, executive director of Bannerman Castle Trust, the nonprofit that manages the island and its structures, and includes music and lyrics by Tom Herman and direction by Frank Marquette.

There have been only five owners of the island since the time of the Revolutionary War: William Van Wyck of Fishkill, Mary Taft of Cornwall, Francis Bannerman of Brooklyn and The Jackson Hole Preserve (Rockefeller Foundation), which donated the island to the state of New York. It was Francis Bannerman, who emigrated from Scotland to New York as a child, who bought the island (chancing upon it during a canoe trip) as a place to store the large supplies of ammunition and other material which were the stuff of his successful Brooklyn-based business. Construction began on a simulated Scottish castle and other storage buildings in 1901; Bannerman and his family used it as a summer residence. 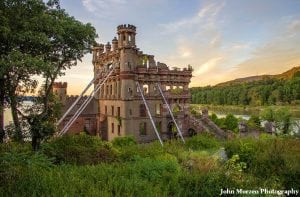 The tower on Bannerman Island, supported by bracing (photo by John Morzen)

The trust hopes to stabilize the structures on Pollepel Island (the original and traditional name) so that it can be a safe and long-term destination for public tours and events. The current focus is on the south wall, which needs to be stabilized at a cost of about $300,000. “The tours help, but we need people to get behind it, to say this is part of history,” Caplan says. “Even if something happens [to an island structure], we will continue, no matter what.”

Work will begin in July on restoring the interior of the Bannerman residence with improved masonry, flooring, lighting and walkways. Once completed, it will become an education center.

The season itself begins April 30 with tours aboard the 44-passenger Estuary Steward, which departs from Beacon and Newburgh. These combine the short trip to the island with a walking tour. The island is not handicap-accessible and there are 72 steps to get to the historic trails; comfortable shoes are suggested, and children younger than 10 are in most cases discouraged from attending. On Saturdays the boat leaves from Beacon Institute Dock at 11 a.m. and 12:30 p.m. and on Sundays at 12:30 p.m.  There is also an 11 a.m. trip from Newburgh’s Blue Point Restaurant Dock. Tickets are $35 for adults and $30 for children.

For those who would prefer to paddle, kayak fundraiser tours are organized in Beacon by Mountain Tops Outfitters, in Cold Spring by Hudson River Outfitters and in Cornwall by Storm King Adventure Tours.  Each includes equipment, instruction and an island tour. The cost of $100 to $130 per person includes a portion donated for preservation.

Those wishing to view the early evening transformation of the skies above the island, as conceived by McGill in her popular Constellation installation, on view through summer 2017, can journey by water on either the Estuary Steward or via kayak through Storm King Adventure Tours. Tours begin on May 7 and can be booked through melissamcgillconstellation.com. There are also viewing points on both sides of the Hudson; visit the website for full details.

For city-dwellers, many of these tours can be combined with a rail excursion on Metro-North; the Beacon dock is adjacent to the rail station.  Tickets can be purchased through Metro-North. Those wishing to make a longer visit to Beacon can take advantage of special overnight packages available with lodging at Swann Inn of Beacon; visit swanninnofbeacon.com.

The setting of Bannerman Island, dramatic and romantic, needs no set designer. Embracing the vistas, three theater companies are matching subject to setting. The Hudson Valley Shakespeare Company, which last year presented An Iliad, this year attaches itself to the Scottish castle and will present an all-female cast in Macbeth, which will also be produced under the tent at Boscobel and head to Beacon on July 23 and 24.

On Sept. 17 and 18, Just Off Broadway, in association with the Sugar Loaf Performing Arts Center, will perform the Arthurian legend Lerner and Loewe musical Camelot.

Closing out the Bannerman season on Oct. 1 will be a performance by Frank Marquette of Poe’s Last Mystery, in which Poe, desperate and destitute, agrees to read from his poems and tales of mystery and is visited by his own characters, who seek revenge on him.

All shows include a cruise, one-hour self-guided tour and the main stage production. Refreshments will be available. There is a four-show package for $240; individual tickets are $65.

Other tales will be told by Cold Spring’s Jonathan Kruk, who spins his “Legends and Lore of the Hudson Valley” yarns for children on Sept. 3 and by Eleanor Owen Seeland, who will discuss the 10 years of her childhood she spent living on the island on June 18, July 16 and Aug. 20.

Foodies can gravitate to several culinary events, including a wine and cheese cruise on June 10 that departs Beacon at 6 p.m. A more rustic Fourth of July bash will be catered by Loughran’s Irish Pub and depart from Beacon at noon. The Hudson Valley Chefs Farm Fresh Dinner Fundraiser includes a five-course meal on Sept. 10, departing Beacon at 3 p.m.  Tickets for most events can be purchased at bannermancastle.org or by calling 855-256-4007.