Many moviegoers who have visited the homey, 55-seat Downing Film Center on Newburgh’s waterfront compare it to a private screening room. Opened in 2006 by a former high school principal, the nonprofit theater not only exposes   audiences to independent cinema but has partnered with community groups, particularly those concerned with economic, education and social-justice issues.

Brian Burke, who, together with his wife Sharon, founded and manages the center, says he “grew up at the movies.” He taught French at Monroe-Woodbury High School before becoming an assistant principal, then a principal at other schools. He retired in 1999 and returned to Newburgh, where he was raised. There he began working with a nonprofit that assisted individuals with developmental disabilities while teaching French at Mount St. Mary’s College.

In 2006, he and his son, Kevin, decided Newburgh could use a independent film center. At the time, the Yellowbird building, a circa 1925 former furniture warehouse, had been restored by Dick Polich, owner of Polich Art Works Foundry. A gallery occupied the main level, but the lower level was empty. The waterfront location was critical, as it was near several restaurants, the I-84 bridge and the Newburgh-Beacon ferry, making it accessible. Working with New England Theatre Service for design and implementation, they had a speedy opening, in July 2006. “We’ve been playing ever since,” Burke says. 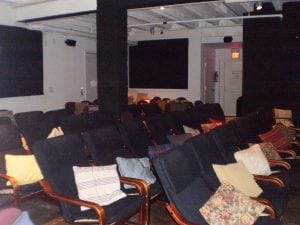 As if a whole bunch of friends cozied up your living room: Downing Film Center’s seating.  (Photo by Brian Burke)

Fitting the space out as a theater involved a bit of trial and error. “There’s an elevator used for handicap access, so that area was protected,” Burke says. “There were also questions about affixing chairs to the floor. Originally we got straight-backed chairs, but eventually we decided to go and get black Ikea chairs and some tables, to make it more homey. We got pillows, too.”

From 2006 through 2012, Downing ran 35mm, projected films. “It was wonderful, but tough,” Burke says. “Around that time the film industry stopped mailing film reels out to theaters, because it was just too expensive. We had to convert to digital — we did a ‘drive to digital’ fundraising campaign and people really supported us, and now we have every movie on a computer hard drive. It was a big change for us, but now we have far fewer breakdowns.” Burke has thought about expanding from time to time, but “we love our location.”

Steve Florin at Florin Creative Film Services in Port Chester serves as Downing’s advisor, watching the market for films he thinks will do well there. “He’s a good guy to work with,” Burke says, “I’m more of the art person. He’ll book anything I ask him to but he gives his opinion on the economics of it.” The toughest months to attract an audience are May through August or September; October starts building and November through March is steady, with a supply of award-winners and people seeking more indoor activities in the colder months.

A number of films are shown in partnership with community groups. For example, Downing recently presented a documentary, The Anonymous People, about “people we see every day who are plagued with addiction,” Burke says, with the Drug and Alcohol Council of Orange County. A discussion followed the film. Downing also has worked with the local YWCA on a social justice film series, the Newburgh Symphony, land trusts, a hospice organization, Planned Parenthood, LGBTQ of the Hudson Valley, Safe Harbors (which works with veterans) and the Youth Council of Newburgh. 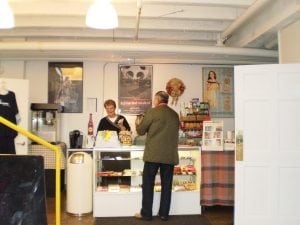 Burke says the greatest pleasure of running a movie theater is the “many wonderful people you get to meet. I’m always telling people that this movie theater belongs to you, not us.” The center is a family affair, with Sharon handling the concessions: purchasing the cookies and brownies, popping the inexpensive ($3 a bag!) popcorn and maintaining a steady supply of Keurig coffees, along with teas and hot chocolate. She, Brian, Kevin (who lives in Brooklyn) and three members of the community make up the Downing board.

The Downing Film Center is located at 19 Front St. in Newburgh. Call 845-561-3686 or visit downingfilmcenter.com for schedules. Ticket prices are $9 for adults, $8 for students and active military, $7 for seniors (age 62 and older), and $7 for children under 16. Tickets can be purchased at the box office, which generally opens a half hour prior to the first screening, or online. Patrons who purchase an annual membership pay $6 for tickets.