A woman committed suicide by jumping off the Bear Mountain Bridge on Tuesday, May 24. The victim has been identified as 63-year-old Nancy Higgons of Hastings-on-Hudson.

Westchester County Police (WCP) received a call just before 4:30 p.m. Tuesday from a witness who reported seeing someone jump from the bridge. WCP Public Information Officer Kieran O’Leary told The Current that the department’s Marine Unit responded and found a woman’s body in the river just south of the bridge at 5:43 p.m. Officers administered CPR but were unable to revive the woman. Higgons’ body was taken to Peekskill’s Riverfront Green Park where she was pronounced dead by Cortlandt-Peekskill Regional Paramedics. 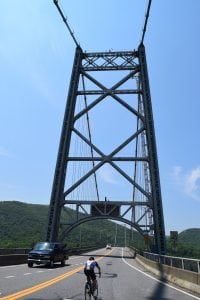 O’Leary said that the cause of death was confirmed as suicide based on witness accounts and surveillance video. New York State Police and New York State Parks Police also responded to the call.

Tuesday’s suicide is the second at Bear Mountain Bridge in recent weeks. A man believed to be from Rockland County was seen jumping from the bridge on May 9. An officer from the Cortlandt barracks of the New York State Police told The Current on Wednesday that the victim’s body has yet to be found.

One suicide every 13 minutes

The American Foundation for Suicide Prevention (AFSP) and the Centers of Disease Control and Prevention (CDC) consider suicide to be a serious national public health problem. It is the 10th leading cause of death in the U.S. In 2014 there were 42,773 deaths by suicide — one about every 13 minutes. AFSP estimates that for every suicide there are another 25 attempts. Males commit suicide at a rate almost four times that of females according to the CDC.

There is no single cause for suicide. AFSP states that most suicides occur when someone suffering from a mental health condition experiences stressors that exceed their ability to cope at that particular time. Depression is commonly associated with suicide, as is anxiety and drug or alcohol abuse. A family history of suicide or violence can also be factor, as can physical illness.

Frequently, someone who commits suicide or attempts to exhibits warning signs. Often what they talk about can be indicative of their intent — such as saying that they are a burden to others, feel alone or trapped, or actually say they see no reason to live. Changes in behavior or entirely new kinds of behavior, especially when it occurs after a painful event, a significant loss or change can also be a warning sign. Some suicide victims give away prized possessions before killing themselves.

Both the CDC and AFSP stress that if someone is having thoughts of suicide, or if someone close to them fears that suicide is a possibility, they should call the National Suicide Prevention Lifeline at 1-800-273-TALK (8255) to speak to a counselor.