The staff at Mount Gulian Historic Site in Beacon were puzzled by a Revolution-era gun lock that came into the office earlier this month. The tag reads: “Lock from the effects of Capt. Silas Talbot, USN. Revolutionary War Hero. Given me by his Gt. (4) Grandson Wm. R. Talbot, Jr. S.C.” Mount Gulian asked on Facebook for help identifying what type of gun the lock would have been used on. 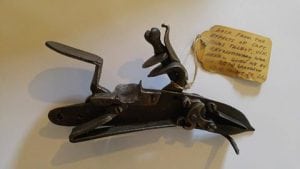 William Covington, a history professor in Texas, replied that it appeared to be from a Brown Bess musket because of the slight backward flair at the rear of the hammer, the non-pierced jaw screw and the jaws themselves.

Capt. Silas Talbot is best known for commanding the USS Constitution (“Old Ironsides”) from 1799 to 1801. He earlier had served as a Congressman from Brooklyn.

One thought on “Mystery Object”