An analysis of the affordability of living in New York, including specific data about the Hudson Highlands, suggests the state is losing hundreds of thousands of residents annually.

By quantifying the cost of living throughout the state, the Reclaim New York Center for Government Reform and Accountability, a Manhattan-based non-profit founded in 2013, says it hopes to inspire a “citizen movement” to help fix a system it calls “broken from the top down.” It has said its programs “focus on empowering citizen-driven oversight that increases transparency, makes government more responsive and makes our state more affordable.”

The group’s principal officer, according to an IRS filing, is Stephen K. Bannon, a businessman and conservative filmmaker who is CEO of Donald Trump’s presidential campaign, co-founder of the Government Accountability Institute and former chairman of Breitbart News. 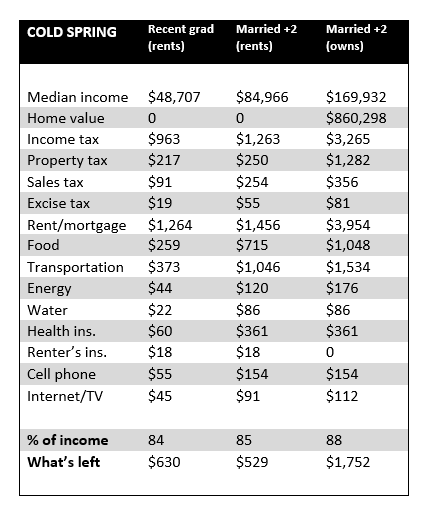 The crux of the study is what the organization calls a “wake-up cost” — the price one pays, through taxes and living expenses, to live (or “wake up”) in New York state. In Beacon, the report calculates that taxes, rent and other costs leave a family making the median income of $68,000 with only $500 per month to save for retirement, education and other long-term expenses.

And while the Hudson Highlands, and Beacon in particular, has become a destination for Manhattan and Brooklynites priced out of the city, Muir says that its wake-up cost — the organization provides a personalized calculator at reclaimnewyork.org — provides a more accurate snapshot of what it costs to live here. For example, you may pay less income tax after moving from New York to the Highlands, but higher property taxes  could wipe out the savings. 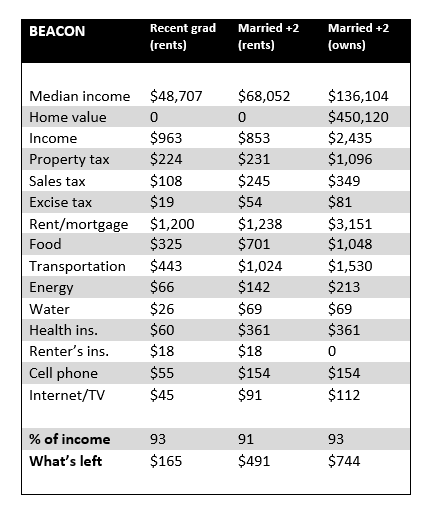 “Our point is not to come across and make a decision for you,” Muir said. “But no one in the market now is giving you the tools for this kind of information. Understand what your total tax burden is — then you can have an educated conversation about what you can afford.”

In Cold Spring, which has a lower property tax rate, the picture is somewhat rosier. Village households making the median of $85,000 are left with about $1,200 a month for savings. However, Muir said that Cold Spring residents will need to save $805 per month from ages of 45 to 65 to pay the property taxes they’ll owe from ages 65 to 85.

Reclaim’s study lacks data on wages in the Highlands, but other research has found that jobs in the region often do not pay enough to support the cost of living here. According to the Newburgh-based Pattern for Progress, only 30 percent of Beacon’s roughly 15,000 residents work within the municipality. Another 31 percent travel to either Westchester County or New York City.

5 thoughts on “Can You Afford to Live Here?”