Shortly after Pete Seeger died in 2014, a request came to the Beacon City Council to commission a statue of the folk icon. Someone even offered to put up the money. It was a heartfelt gesture, but there was one problem.

“The last thing Pete ever would have wanted was a statue,” said David Ross, who knew the musician well. “He would have risen up from the grave and pulled that statue down himself. He was remarkably free of ego entanglements.”

So a statue was out. But the question remained: How would Beacon celebrate its native son? About the same time, Scenic Hudson approached Phil Ciganer, owner of the Towne Crier Café on Main Street, about organizing concerts at the group’s River Center at Long Dock Park.

He turned them down. “I didn’t want to go into competition with myself,” he said. “But I thought about it, and I wondered why there wasn’t some sort of folk music hall of fame. And what better place for it than Beacon?” 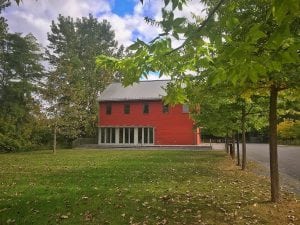 Scenic Hudson’s River Center at Long Dock Park, the new home of the American Center for Folk Music (Photo by B. Cronin)

And so Ciganer and Ross, along with nine other musicians, consultants and Seeger collaborators such as Main Street Music’s David Bernz and journalist Andrew Revkin, founded The American Center for Folk Music and serve as its board. On Sunday, Oct. 16, at 4 p.m., the nonprofit will celebrate its new home at the River Center with a free concert with Tom Chapin, John McCutcheon and Joe Louis Walker. (In the event of bad weather, it will move to the Towne Crier.)

The ACFM offices will occupy the top floor of the River Center; the two lower floors will continue to be used by Scenic Hudson but will also be open for ACFM and other community events. Ross said the ACFM board sees the River Center as a temporary home that it hopes to eventually outgrow. 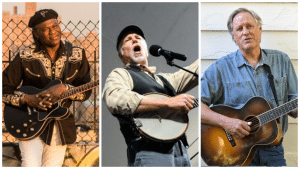 Walker, McCutcheon and Chapin will perform on Oct. 16.

In the meantime, the ACFM’s organizers and supporters need to figure out what it wants to be and do, said Ross, who is no stranger to the process of hashing out an institutional philosophy. He’s served as director of Boston’s Institute of Contemporary Art, the Whitney Museum of American Art and at the San Francisco Museum of Modern Art. He’s seen firsthand what happens when institutions have identity crises because they lacked a strong founding philosophy. “We want to build an institution from the ground up that reflects our shared values, and our shared understanding of the world, and what the world needs in relation to an institution like ours,” he said.

The ACFM plans to hold meetings and discussions about its purpose and mission and to host exhibits on the history of the genre. And Ross said the Oct. 16 concert will be the first of many. The center also plans to put together a hall of fame, although no one wants to call it that.

“That seems antithetical to the [egalitarian] idea of folk music,” Ross said. However, that can’t be accomplished “until we build up the kind of authority to do those kinds of inclusions. All of that will start in the River Center.”