In response to a report about the increase that appeared Oct. 7 in The Current, Main Street shopowner Patty Villanova posted: “Instead of welcoming the boats with open arms and doing everything possible to encourage more of this kind of activity, they go and raise the rates thus insuring that we will have fewer visitors…. Maybe [Mayor Dave] Merandy & Co. need to take some classes in business administration before they bankrupt the remaining merchants in the Village.”

At the Oct. 11 meeting, Merandy pointed out that Seastreak, the firm that offers fall cruises to Cold Spring and is the most frequent user of the village dock, agreed to the increased cost, which went to $6 per foot from $3. The 141-foot Seastreak now pays the village $846 per visit. Early noted  that the cruise company raised its ticket price to $85 from $65 before the village increased its docking fee. 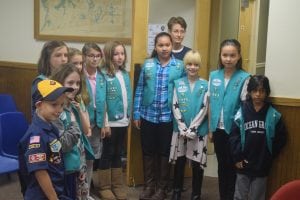 “The village is in no way responsible for the increase in [passenger] fees,” Early said. “There was a little misinformation there.”

She added that research done by the Cold Spring Boat Club indicated that “we are not even charging what we should be…. We are a cheap place to dock.”

Seastreak’s boats carry up to 505 passengers. Ticket sales have been slow so far this year, which is not unusual before the fall colors reach their peak. The weather has also been less than perfect on a number of weekends. By contrast, there were brisk ticket sales last fall, with two boats sometimes needed to meet demand.