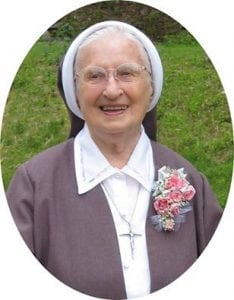 As an Atonement missionary, Sister served in parish, retreat and guest house ministries in Canada (Greenwood and Revelstoke, British Columbia), New York (Mechanicville, Amsterdam and Graymoor), Boston and 57 years in Italy (Quadrelli, Rome and Assisi) before returning to Graymoor in 2006.

Besides her Sisters in Community, Sister Rosita is survived by a brother, Americo Perpetua (Louise), and several nieces and nephews.

A funeral Mass is scheduled for 11 a.m. Monday, Nov. 14, at the Motherhouse Chapel, St. Francis Convent, Graymoor, followed by interment in the Sisters’ Cemetery.

Besides her Sisters in Community, Sister Mary is survived by her sister, Sr. Roseanne Saunders, and her two brothers, Thomas and James.

A funeral Mass was held Nov. 1 at Graymoor, followed by interment in the Sisters’ Cemetery.

She was born Jan. 8, 1917, and entered the Franciscan Sisters on Sept. 8, 1941. After profession in 1943, Sister went to St. Veronica’s in Greenwich Village for three months, then taught at Our Lady Queen of Martyrs School in New York City. From 1952 to 1971 she taught at St. Joseph’s Branch of Cathedral High School in Greenwich Village. From 1971 to 1979 she served at Queen of Angels Convent in Peekskill, and at Mount St. Francis in Peekskill, where she took charge of the Lay Associate Program.

A funeral Mass was held Oct. 13 at Mount St. Francis, followed by interment in the Sisters’ cemetery.