As the physical and symbolic heart of the home and family, the kitchen sits firmly at the epicenter of any holiday. You can buy gadgets galore that will gather dust and clutter cabinets, but I believe the following humble gifts are essentials and mindfully wielded. 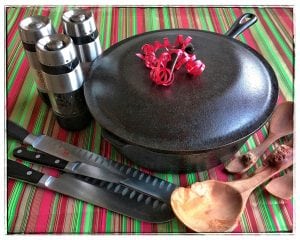 Gifts that keep giving: knives, spices, the only pot you need and one-of-a-kind spoons (Photo by J. Dizney)

One pot for all

Outside of roasting flesh over a fire, most every cooking technique requires a pot. The ultimate utility player is the cast-iron skillet, in particular an extra deep model approaching Dutch-oven size that serves as a soup pot or braising dish. This is especially true when outfitted with a tight-fitting, domed, cast-iron lid.

Mine is an heirloom, 10½-inch Wagner that belonged to my south Louisiana grandmother, cured to a satin-black lustre. The cranberry upside-down cake I shared in the Dec. 2 issue was baked in that pan, as well as, over the past year, a pan-seared, oven-roasted salmon, fried chicken, a lamb-and-white-bean stew, risottos and too many other meals to mention. You can even fry a nonstick egg or omelet if you’re faithful about cleaning (no soaps or heavy scrubbing) and a light re-seasoning immediately after each use.

My pick as a gift and heirloom is the Lodge 3-quart deep skillet with cover. It comes pre-cured, though three or four cycles of a flax oil rub, followed by an hour in a 200-degree oven and cooling, will improve that surface demonstrably. Any novice or “seasoned” cook will be grateful: it’s good enough for campfires, so just think of what can be done with a little imagination. The skillet is $33 to $56 online; Old Souls on Main Street in Cold Spring stocks Lodge cookware.

A sharp knife (or three)

Most kitchen time is spent cutting, chopping, mincing, peeling — almost nothing hits the pot without blade work that benefits from a sharp knife. In most cases you can get by with a so-called “chef’s knife” (a seven-to-eight inch blade that widens from the tip to 1½-inch in width). The Japanese-style Santoku blade, with its signature “sheep’s foot” downward sloping tip, has become an acceptable and occasionally preferred alternative. Most have hollow-ground divots off the edge to keep food from sticking. I lean on my seven-inch Wustof Santoku for almost everything.

I asked Harper Keene, a professional knife sharpener who services cutlery a few times each year at the Cold Spring and Beacon farmers’ markets, how he would go about selecting a gift. Good steel (i.e., not anodized) is his prime consideration and he points to a number of manufacturers — Victorinox, Sabatier, Wustof and Henckels — as widely available and also sings the praises of the Japanese brand  Global. He likes a rigid-but-thin blade but not surprisingly says of any brand, “sharpness is not inherent. If you like it and use it, have it sharpened.”

He also stresses care: “Put them away dry, in either a knife block or on a magnetic strip.” Do not use ceramic cutting boards, and your knives should be buffered by three-to-five passes at a 20-degree angle on a sharpening steel before and after use.

Keene and I agreed that a cook’s batterie also deserves a three- to four-inch paring knife for trimming and peeling and a serrated bread or bagel knife with an edge of large-scalloped serrations not only for bread but for prepping tough cuts of meat and slicing tomatoes and vegetables with different outer and inner textures.

The spice(s) of life

There are only two spices you need: salt and freshly ground pepper. For the latter, I have spent far too much money on designer peppermills that have repeatedly broken my heart. But I will roundly sing the praises of the $25 OXO Pepper Grinder. It features an easily adjustable grind, even easier filling and has a clear body so you can see when you are running low.

The grinder comes filled with black peppercorn (and chunk sea salt if you buy the salt-and-pepper set) but if you feel particularly generous, spring for some Telicherry or Malabar black peppercorns and Himalayan Pink Salt for finishing. For the truly generous, throw in a third grinder of Penzey’s Sarawak or Indonesian Muntok white peppercorns.

A spoonful of love

I first came across Dan Dustin’s hand-carved spoons at the New Hampshire Craftsman’s League annual fair some 25 years ago. Each spoon is hand-split and hewn with handmade tools from cherry, apple, mountain laurel, driftwood — you name it. I cherish my small lilac wood cereal spoon and a salad set fashioned from a split walnut burl. Each piece is cured in warm beeswax and walnut oil to replace the sap and “ironize” the wood, making them both strong and flexible, and incredibly beautiful.

Dan usually exhibits in New York City at the St. John the Divine Christmas show, which this year is on hiatus due to construction. You can reach him at 603-746-5683 before 9 p.m.