Three weeks after the Coast Guard closed public comment on a proposal to add 10 anchorage sites for oil barges on the Hudson River, including a site between Beacon and Newburgh, the U.S. Department of Transportation is asking for feedback on proposed restrictions on trains that carry oil along its shore.

The comment period was scheduled to open Friday, Dec. 30 and continue through Feb. 28.

New York has pushed for stricter regulation of the oil trains, often derided as “bomb trains” because of their potential explosive power. In neighboring Quebec, a 2013 oil-train accident triggered an explosion and fire, killing 47 people and destroying part of a village.

Working through its Pipeline and Hazardous Materials Safety Administration, DOT wants public input as it considers whether to establish limits on the vapor pressure of hazardous fuel shipped by rail. Higher vapor pressures contribute to crude oil’s volatility and flammability. 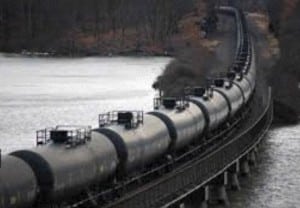 DOT published its notice in November, nearly a year after New York Attorney General Eric Schneiderman petitioned the agency to limit vapor pressure to less than 9 pounds per square inch (PSI). The agency’s announcement specifically referred to Schneiderman’s request but asks only for reaction to setting “a range of vapor pressure thresholds,” not just below 9.

According to the Attorney General’s Office, some types of oil, such as the crude from the Bakken Shale formations in North Dakota, have the highest vapor pressures and thus pose a greater threat than other fuels. It noted the Quebec accident involved a train carrying oil with a PSI above 9.

In a statement, Schneiderman said he welcomed the DOT initiative, calling it “a long-overdue first step towards reducing the danger to residents in harm’s way of oil trains in New York and across the country.”

Hayley Carlock, director of environmental advocacy for Scenic Hudson, said the Poughkeepsie-based organization intends to submit comments. “We believe it is certainly a step in the right direction to adopt such limits, but remains to be seen how stringent the ultimate rule will be,” she said.

In his petition to DOT, filed in December 2015, Schneiderman pointed out that no national limit on vapor pressure exists for train shipments. Two years ago, after the New York State departments of transportation and environmental conservation raised concerns about bomb-train hazards, North Dakota mandated that oil producers make Bakken crude safer before shipment by keeping vapor pressure to 13.7 PSI or less.

The docket number for the proposed rulemaking is PHMSA-2016-0077, and the petition will be available at regulations.gov.

7 thoughts on “From Barges to “Bombs””