Highlights from Dec. 20 and earlier meetings

As of two weeks ago, a plaque with the word inclusive hangs on the door of a two-stall restroom at Haldane High School.

“Our Identity Club recently implemented an all-inclusive bathroom, which is a huge step within the LGBT community,” said Miranda Musso, student body vice president. “It’s a really great, positive step for us.”

While the restroom has been unofficially open since before Peter Carucci became principal this year, he agreed to order the sign after the Identity Club requested it at the end of September. 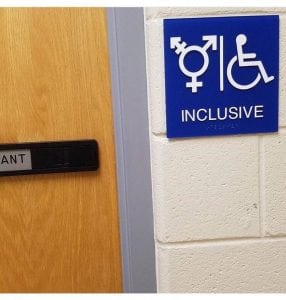 The Garrison School also has an all-gender restroom. James I. O’Neill High School, which many Garrison students attend, does not have designated gender-neutral restrooms; students are welcome to use the restroom of the gender with which they identify, as well as the nurse’s private washroom, according to Superintendent Frank Sheboy.

The Beacon City School District did not return a message asking about its policies.