After nine years of shadows, plan in place to reopen Garrison’s Landing site

After nine years of sitting empty, the building that housed Guinan’s Country Store for more than 50 years before it closed in 2008 may reopen soon as a café operated by Fresh Company.

Garrison Station Plaza, which owns the structure, hopes to see the building’s ground floor under the management of Garrison’s Shelley Boris, who co-owns and is creative director and executive chef for Fresh Company caterers, which also runs the café at Storm King Art Center. The upper floor would house two apartments.

To restore the building, the nonprofit Garrison’s Landing Association is soliciting tax-deductible donations and so far has raised more than $250,000, or about half what is needed. Garrison Station Plaza has a building permit in hand for what it hopes will be the final stages of arranging financing. 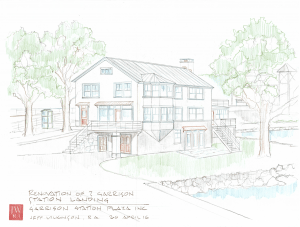 A rendering, by architect Jeff Wilkinson, of the proposed renovation of No. 7 Garrison’s Landing, the former Guinan’s site

The many people who visit Garrison’s Landing and are charmed by its historic character and nestled-by-the-river ambiance may be surprised to learn how different part of it looked as recently as the 1960s. Many of its buildings were constructed in the 1850s as tenant housing and have since been restored. The parcel of land running adjacent to the Metro-North tracks once served as home to Garrison’s post office, library and firehouse. It includes the 1892 railway depot (now the Philipstown Depot Theatre) and the Garrison Art Center (formerly Forson’s general store) and the responsibility of being on the National Register of Historic Places.

Its maintenance is overseen by two entities: the nonprofit Landing Association and the for-profit Garrison Station Plaza. The association was formed in 1962 by residents to purchase from New York Central Railroad the railroad building and the road leading to it (they later acquired the marina area). Garrison Station Plaza was formed in 1966 to purchase land and buildings on the waterfront at Garrison from the Belcher Realty Co., as part of general plans to restore the neighborhood.

At the time the buildings were acquired by Garrison Station Plaza, the occupants included two tenants who are still there: the Prescott family and the Garrison Art Center. A third longtime tenant was Guinan’s. 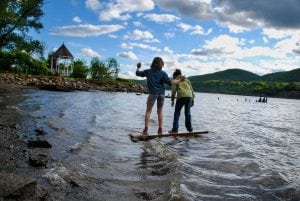 A summer scene at Garrison’s Landing (Photo by Mike Enright)

The rents collected by Garrison Station Plaza cover maintenance and other expenses. The Plaza has never generated a profit, and many stakeholders have donated their shares to the Landing Association, making it the majority owner of Garrison Station Plaza (which causes much confusion). Many in the community are unaware that the restoration, care and upkeep of the area such as plowing, litter cleanups, sidewalk maintenance, lawn mowing, flower planting, erosion protection and insurance coverage come not from the Town of Philipstown but from donations.

Board members say this lack of consistent funding has stalled the development of another food establishment at the former Guinan’s site.

Garrison’s Landing, like the hamlet of Garrison, was named for Harry Garrison, who ran a ferry established in 1821 to West Point. It was a primary means of getting to the military academy until the construction of the Bear Mountain Bridge in 1929. After being filled in, the slips and the hulks of several ferries became the picturesque park at the heart of the Landing. 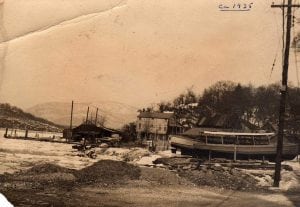 Image of Garrison’s Landing, looking north, circa 1935. The building on the left and others seen through the boats, belonged to Garrison Coal Co. (Image courtesy of Del Karlen)

When parts of Hello Dolly were filmed at the landing in 1968, the 20th Century Fox crew built the gazebo and repainted several facades, investing about $60,000. That exterior restoration jump-started attention to the interior, which needed insulation, heating repairs and water systems.  All of this became the focus of Garrison Station Plaza.

Much of the landing was owned by the Belcher family, descendants of Henry White Belcher, owner of the Garrison and West Point Ferry Co. The Belcher family, headed by Col. Taylor Belcher, also owned the Garrison Coal Co. As recently as the late 1950s, the area nearest to the coal company, at the north end of the landing, was filled with the remnants of a once-thriving industry, including shacks and sheds on the promontory leading out from the 1840s Golden Eagle building, once known as the Garrison Hotel.

Latter-day Belcher family members were involved with both organizations and their efforts, with Taylor Belcher Jr. (Toby), who at one time served as U.S. ambassador to Cypress and to Peru, serving as president of each organization for a period.

An early photo of Garrison’s Landing. The water near the homes was filled with dirt and ferry hulls to create the present-day waterfront park. (Image courtesy of Nancy Prescott)

Today the Landing Association rents the former depot to Philipstown Performing Arts through the Town of Philipstown, and the 1950 marina — once home to a seaplane base and flying school operated by Don Yannitelli Sr. — to the Garrison Yacht Club. Garrison Station Plaza, meanwhile, leases out the mix of residential and commercial properties, most acquired through donations from the Belcher, Osborn, Hine and O’Neill families, among others. It also owns the parking lots on the east side of the tracks, which it rents to Metro-North for parking.

Del Karlen, president of Garrison Station Plaza, said that in some instances, rents for properties used by the community have been kept at below-market rates. “The business allows us to keep up the appearance of the landing,” he explained. “We don’t make money on the rent, but we do have expenses, mortgage payments and taxes to deal with, and the rent allows us to maintain things.” The Landing Association’s 2016 donation appeal letter highlighted the formidable work needed at No. 7 Garrison’s Landing, (the former Guinan’s) namely “new septic, flood-proofing and extensive interior and exterior structural refurbishment.”

Some Landing Association board members believe there is a misconception of its role, particularly in relation to the Guinan’s site. “People think we are asking for funding for an upmarket restaurant business, but that’s not at all the case,” said Margaret O’Sullivan. “It’s important to remember that none of the cost of this is included in local taxes — in fact we pay tens of thousands of dollars in local taxes. We’re doing our best to raise the money necessary to rejuvenate the south end of the landing and revitalize the area, which will then help out the yacht club, the theater and the art center. Really, everyone who visits the landing will benefit.” (The other board members are Peter Hofmann, Sara Silbiger, Donna Pidala, David Lilburne, Carl Nelson, Katie Roberts and Byron Stinson.) 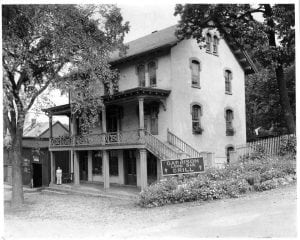 Some residents have expressed concern that making the landing too appealing will cause it to be overrun with visitors, as has happened with sites such as Breakneck Ridge and Indian Brook Falls. But board members say they are happy to see the park enjoyed as a “private property, open to the public.” Said Hofmann, the board president: “Visitors coming and bringing their chairs out by the river on a Sunday, people launching kayaks from the landing — we welcome all of that.”